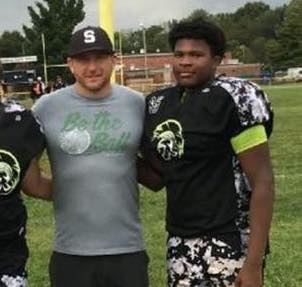 Every year it happens. Every year kids come up from middle school football and get plugged-in to some varsity two-deep or, sometimes, even the starting line-up. People always profess amazement and assume the program must be struggling or else whey would a freshman be playing? The answer isn’t the program is struggling. The answer is these young men are working. Now, there are middle schoolers and then there are All-State/All-American caliber middle schoolers and there is a huge difference between the two kinds. Like Louisville’s Elijah Manning, for instance.

Elijah Manning is 5-11 and weighs right at 220 pounds. He has a registered 40 time of 5.1 seconds and a pro-agility shuttle of 4.9 seconds. Elijah is primarily a defensive end, and he has the length, speed, burst, and bend (flexibility) to play right there. As he continues to develop and lengthen, as his frame suggests he will, he could also turn into a really athletic, big bodied, long armed offensive left tackle. Manning is a fixture on Team Kentucky as he played for the FBU team earlier this year and is slotted to play for Team Kentucky in the Future Stars’ Classic at the end of June. Elijah Manning is attending the Class 6A, football powerhouse, Louisville Male High School in the Fall and will start out on the freshman team, like everyone at Male. However, don’t be surprised to hear of his meteoric advancement once the season gets here. Elijah has just started in the weight room with an eye toward early playing time and the results so far have been impressive. Manning is already benching 225 pounds, squatting 325 pounds, and pulling (deadlifting) 275. Watch what happens to the 5.1 second, 40 speed when his back squat shoots up about 100 pounds, which will happen faster than most of you can possibly fathom.

Manning is a great example of wait until you see how he looks at the Future Stars’ Classic. With freshmen reporting to varsity workouts today all over Kentucky, these strength coaches have over a month of time to mold these young men into beasts whom the middle school fans will hardly recognize come game-time this summer. KPGFootball‘s prediction here is Manning will look like a varsity regular by the time Tennessee vs. Kentucky kicks off at Georgetown College.