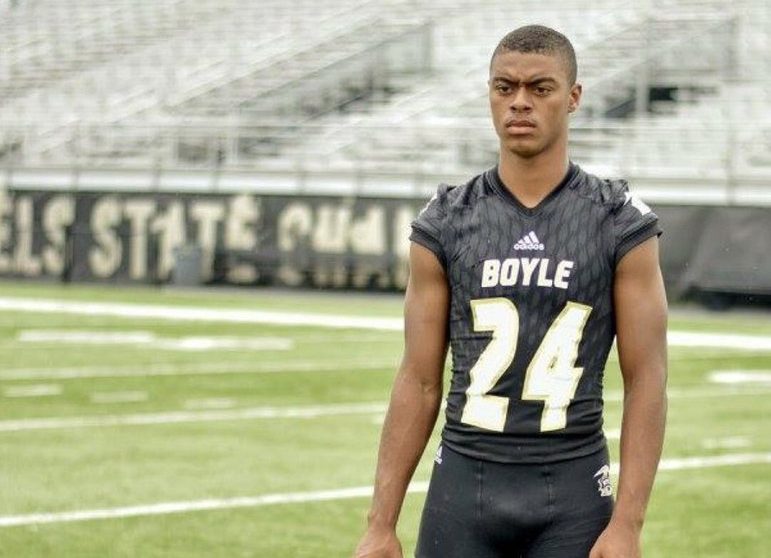 There is really no secret that Landen Bartleson is the best athlete in the class of 2020 anywhere in Kentucky. We thought that when he was selected to our AFI-KPG Sophomore All-State Football team as a running back. Truthfully, he makes that team wherever he aligns. Landen, who is sporting offers from both Louisville and Purdue to play his college ball, was Boyle County‘s second option at running back last season. Tanner Crawford, whom we featured just yesterday, was option 1, ahead of Bartleson, much of the year. I don’t know how much longer Crawford will be able to hold off the hard charging junior to be. If there are two things colleges love in football prospects it is frame and speed. I mean, speed both thrills and kills on a football field. Bartleson is a 6-1 and 182 pounds of explosive, back-end length, and recovery speed. We predict at KPGFootball that Landen will be most coveted in college as a corner.

Now when you talk about speed, there is a difference between a prospect whose dad or coach is claiming he has clocked either his son or player running under 4.5 seconds in the forty and a kid who ran a FAT (fully automated time) 10.9 second 100 meter while winning the State High School Outdoor Track Championship, in his classification at the end of his sophomore year. For those of you who don’t know, the NFL uses a published table to convert 100 meter times to 40 yard sprint speed. That table can be found at reddit.com, and, according to that table, 10.9 in the 100 meters equates to Bartleson running a forty yard dash in the neighborhood of 4.49 seconds. That is a laser time and that is flying. As much as FBS, power 5, football programs love tall, rangy, corners with length and speed, no wonder programs like University of Louisville and Purdue University are springing to offer the 6-1 inch corner from Boyle County running a FAT 4.49 forty. Those type corners just don’t grow on trees.

Now I can hear all the naysayers out there with their just because he has frame and speed doesn’t make him a football player. That is true. Tennessee had an olympic gold-medalist in the 100 meter come out and try to play football, decades ago, and he really never panned out for the Volunteers in spite of being considered the fastest man in the world at the time. Guys, I knew Sam Graddy, and Landen Bartleson ain’t no Sam Graddy. Landen Bartleson is a football player, on that there can be no doubt. Last year, in only 159 rushing attempts, he gained 1,137 yards from scrimmage for an average of 7.15 yards per attempt. Bartleson found the end zone 20 times on the ground and another three times on the receiving end of passes on his way scoring 144 points. On top of the offensive production, he picked off a pass and registered 43 tackles from his cornerback slot. The acorn didn’t fall far from the tree either as his father, Brian Miller, was both a state track champion in the 90s at 100 meters and a star football player for the Lincoln County Patriots. Miller played on both sides of the ball for the Patriots at both QB and DB.

We, here at KPGFootball believe Landen Barlteson is the best pure athlete anywhere in Kentucky in the Class of 2020. He is set to have a monster junior season for Coach Chuck Smith‘s Rebels in 2018. Can’t wait to see it.