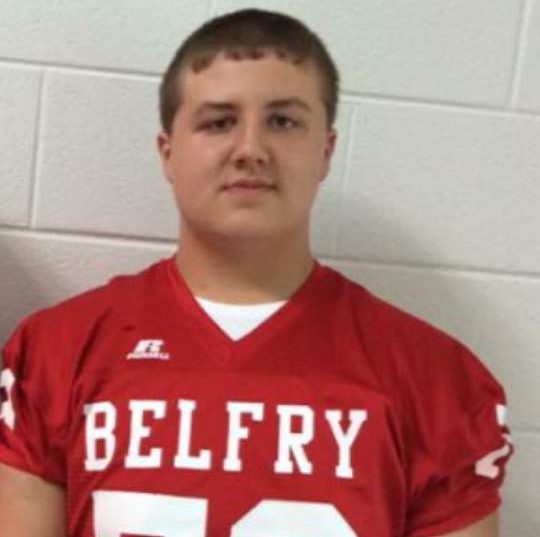 I have no idea why, and it is probably the dumbest thing ever, but, when I think of Belfry’s Keaton Thacker, I always think of the kid’s song…With a knick knack paddy wack/Give a dog a bone/This old man comes rolling home. I have a penchant for shortening names, as most people do. My son’s name is William and so I am oft to call him Will (which my wife hates). I generally refer to Belfry’s Ethan Wolford as just E, and I want to call Keaton Thacker, Thack. Football is a game played in pads, players with a sufficient degree of Nasty in them are commonly referenced, in football circles, as having a lot of Dog, and the defenders in front of Keaton generally go rolling home from his driving them off the line of scrimmage.  So the lyric, for me, changes to…knick knack padded Thack/Give that dog a bone/That old man went rolling home. Oh well, the human mind is a strange apparatus, and particularly the way mine seems to work.

Phillip Haywood, at the end of last season, completed (by my count) his 43rd season at the helm of a high school football team. His 43rd edition finished 11-2 and he stands at 428-131 over the period of time. When coach Heywood began coaching, winning 10 games in a season was significantly harder than today, where, more times than not, it is harder to miss the playoffs than make them. His averaging nearly 10 games a year for 43 years is just an amazing accomplishment. If there is something on which he and I would appear to agree, from my vantage point having never actually gotten the privilege of talking football with the gentlemen, it would be our both being fans of dominant offensive line play. He regularly produces big, mobile, drive blocking machines behind which to run. It has to be a point of coaching emphasis over just being lucky. Belfry gets down-hill in a hurry in the run game. Belfry carries the fight to you at the line of scrimmage. You just don’t gain 4,813 yards rushing over 13 games any other way. That is over 370 yards, on the ground, every night you take the field.

We here at KPGFootball have virtually composed sonnets in praise of the Belfry front five. It is the reason we picked them to edge out Boyle County in our preseason top-5 poll in the 3A classification. Think about this for a second…what do you have when you build an offensive line around the best center in Kentucky (at the very least in the 2020 class), Ethan Wolford and flank him with college guard prospects Dagen Rash and Keaton Thacker at 6-3, 295 pounds? Well, in our opinion you have two things…1. a good reason to run the football right up the middle, and 2. a good recipe for how to win 428 games in 43 years.

Keaton Thacker is quick off the ball from out of his stance and fires out, not up, running his feet throughout the block. He uses his hands well, with excellent punch and clamp, and keeps his elbows inside the shoulders and his face planted in the Defender’s numbers, using his long, strong arms to both separate and finish his blocks. From the film I saw, many of Thacker’s drive blocks finish with Thacker planted on top of a defender lying flat on his back in the defensive second level or deeper. I couldn’t get much feel for how well he pass protects as Belfry is a run first, second, and third kind of attack. Thacker plays with low pad level with excellent leg drive indicating he is both explosive and has a good, strong core. He transitions smoothly and evenly from out of his stance to engagement with the defender and plays hard and through the whistle. Thacker looks to me, in every way, to be a big time interior offensive line prospect who should play at either the FCS of FBS levels.