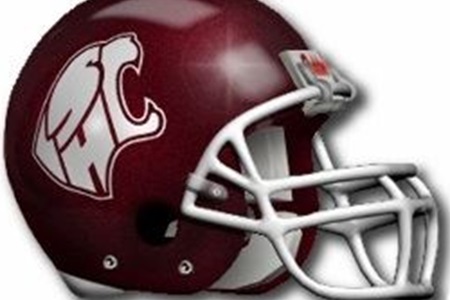 I felt like I was watching the NFL draft when the Class of 2022 phenom, Kiyaunta Goodwin, was formally announcing where he would play in high school. Was he going to Louisville Trinity, St. Xavier, St. Francis DeSales, Louisville Male, which traditional power would get the services of the Country’s top rated offensive tackle in the Class of 2022? You feel my calling him the top-rated offensive tackle in the country in the 2022 class a bit exaggerated, do you? Well, do you know of any other 8th grade tackle in the County sporting offers from the likes of Georgia, LSU, University of Louisville, Syracuse, Cincinnati, and WKU? I didn’t think so. So I was a bit surprised when Goodwin announced he would attend Coach Bob Bronger‘s Class 1A, district 3, Holy Cross High School (Cougars). It reminded me of a story I heard once about what the late, famous, and exceedingly quotable, Coach Bum Phillips said the day the Houston Oilers drafted Earl Campbell first overall (out of the University of Texas) in the 1978 NFL draft. As the story goes, Coach Phillips was asked how soon he thought the running back would be ready to contribute to the Oilers. Legend has it, Phillips answered, I would expect day one. Earl Campbell had an immediate impact, in deed, as he went on to earn NFL Rookie of the Year honors and was named the NFL’s Outstanding Offensive Player in each of his first three seasons.

Now, I was no where around when Coach Bob Bronger learned that the most decorated middle school player in the Derby City‘s history was going to attend Holy Cross. Had I been, I would have asked of him the same question posed to Coach Bum Phillips upon his team’s selection of Earl Campbell. I would have said Coach, how soon until you believe Kiyaunta Goodwin will contribute to Holy Cross next season? I imagine his response would likely have been Phillipsonian, if you will permit me to create my own word. There is good reason Goodwin elicits such a response. The reason is because…

Calling Kiyaunta Goodwin merely a rising freshman lineman is similar to calling Earl Campbell merely a running back. I suppose it is technically the case, but neither of the extraordinary football players can be fairly described as merely anything. Goodwin is 6-7 and weighs 370 pounds presently but is expected to play this Fall in the neighborhood of 330 pounds according to his trainer Chris Vaughn, whom we were able to reach and interview in connection with publishing this article. Chris owns and operates the Aspirations Fitness Institute which has become the facility, training all of the top Kentucky athletes in the Louisville, Kentucky area. For example, though only just having left the 8th grade, Goodwin, who has incredibly long arms, is maxing in the neighborhood of 335 pounds on the bench press and has leg pressed 1,220 pounds. In an era when most young men Goodwin’s size are fat, uncoordinated, and doughy, with barely enough core strength to bend over and tie their own shoes, Goodwin is none of those things. He is athletic, strong, and built like an athlete much older than his tender years. There is no doubt Goodwin goes into the Holy Cross lineup, a team coming off a 6-6 season, on day one. If there was a day zero he would be in the lineup that day too.