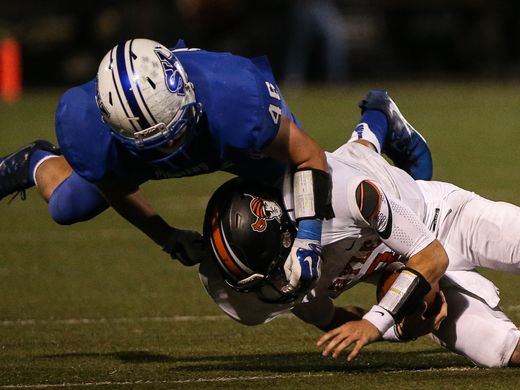 We wrote the other day about Austin Hammack, who is a Class of 2020, RB, who, last year for the Pioneers, gained 806 yards from scrimmage. For the Pioneers to hope to do as well this upcoming season, even with the loss of a senior QB Matt Shearer, the 6-3, 210 pound QB who passed for 3,870 yards and 47 TDs during his two-year stint as QB-1 for the Pioneers and who completed 165 of his 276 passing attempts for 2,532 yards and 33 passing TDs against a paltry 7 interceptions just last season, they are going to have to be a little tougher against the run. The Pioneers may not score over 44 points a game without Shearer at QB and may not be able to withstand permitting over 164 yards rushing and over 22 points a night this coming season. Simon Kenton, who was quite good last year as one of the best football teams in Kentucky’s largest and most difficult classifications (6A), won 11 of its 13 contests before losing in the 2nd round to a Louisville Trinity team which, truthfully, no one in the Commonwealth of Kentucky appears able to give much of a contest. Neither did the Pioneers, dropping that game 49-17 to the Shamrocks.

One thing is for sure, the loss of Will Parks and his 99 stops a year ago, 59 of which were solos, won’t help the defense’s cause. It’s a good thing Bryson Pernell is back in 2018. Much like in the Weber photograph attached to the left of this paragraph, depicting a Pernell trailing just behind Will Parks on the play, Pernell was in close pursuit all throughout the 2017 football season of Parks as the Simon Kenton defense’s leading tackler. Pernell was the second leading tackler over the course of his junior campaign with 95 tackles, 44 of which were solo stops. In addition to the tackle figures, again, second on the team to only the now departed Parks, Pernell was tied for the lead in fumbles recovered with 2. Also recovering a couple of fumbles for the Pioneers on the year were JJ Courtney, Brady Nipper, and Justin Sabie. One of the main responsibilities for any defense is to get possessions for an offense and the Pioneer defense got the offense the ball back an extra 20 times in 13 games via either fumble recovery (11) or interception (9).

Bryson Pernell, at 6-0 and weighing in the neighborhood of 190 pounds, has as his listed positions both MLB/OLB. We here at KPGFootball can see him developing into a MLB, at the next level, more so than we see him outside because he lacks the length colleges look for in OLB’s these days. All of that aside, there is really no question the playmaker will be important to Simon Kenton‘s fortunes this upcoming season regardless of exactly where he finds himself deployed.