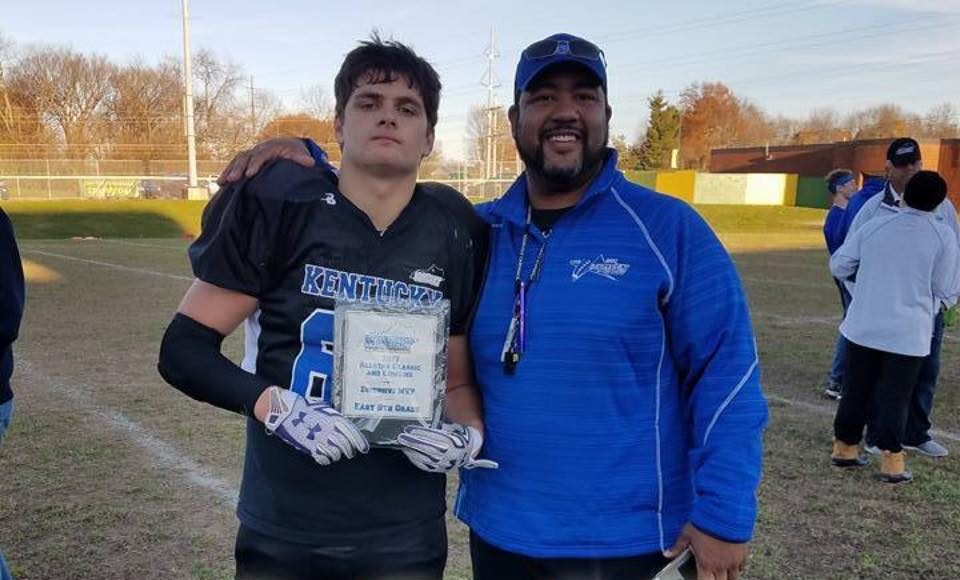 Brandon Dobbs may be the best reason for the need for an online magazine like Kentucky Prep Gridiron I could ever hope to give.  This kid can play. What I mean by he can play is he is easily in the top two or three defensive linemen anywhere in the Commonwealth of Kentucky’s 2022 class. I tell you how good he is; he is slated to attend Louisville Male, which typically doesn’t play freshman, and they have listed him on its 2018 varsity roster. Now, that may mean nothing at all, or maybe it does, who knows. What I do know is there is nothing on the internet, by way of feature article or even height and weight, anywhere (or I would have found it) about Brendon Dobbs and he is a player who should practically be a household name around the Commonwealth.

Dobbs‘ listed positions are nose, defensive tackle, and defensive end. Now this past weekend at the Tennessee-Kentucky Future Stars Classic, I mostly saw him deployed along the interior as opposed to at end. I would say he played anywhere from a one to three technique from where I was sitting. What I can tell is that he was completely unblock-able and, between Belfry’s Jacoby Thornsbury and him, Tennessee was effectively dissuaded from trying the middle all day long. Any time the ball was run up the middle, Tennessee suffered dire enough consequences to dissuade any further attempts. Not sure of Dobbs‘ exact physical dimensions but I would put him at close to 6-2.5 and in the ball park of 250 pounds. If he moves as well as it appeared from watching him play, I wouldn’t be a bit surprised to see him permanently deployed at DE. Dobbs reminds me of Anderson County’s Darion Dearinger, and that is heady praise indeed.

Dobbs trains with Chris Vaughn with Aspirations Fitness Institute in Louisville and the picture of him to the right of this paragraph shows him standing next to Chris Vaughn, proprietor. Now Vaugh is 6-5 and I would wager Vaughn is in the 260-270 pound range so comparing the two, you get some idea of Dobbs’ physical dimensions. In any event, you, at least get some estimate of his height. Brendon is active with his hands and is excellent moving his feet and gaining both separation and penetration into the backfield causing all kinds of havoc. Brandon has a low get-off  and a quick burst at the snap making him in the OL’s face before the lineman even has a chance to fire off. Once Brandon gets his hands on a lineman, he can either shed, club, rip, or swim his way to making backfield tackles.

I can tell you this, Brandon has won the Defensive MVP in almost everything in which he has ever competed on a football field. Dane Key won Defensive MVP for Team Kentucky this past week-end and deservedly, but I can tell you the hold-up in announcing the winner was due to several coaches on Team Kentucky insisting that Dobbs, with his 12 tackles, 3 sacks, and a forced fumble, should either be awarded the distinction or, at the very least, share in the award. Considering Key intercepted two passes including one which scored Kentucky’s only TD on a pick-six to provide the winning margin, the fact there was another candidate for the award is remarkable and says a lot about Dobbs‘ play. I would get to know who this guy is and…tell a friend.