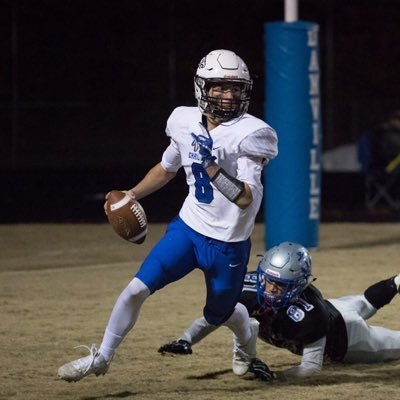 You’re the Class 2A, district 7 Eagles from Lexington Christian coming off an 11-2 season. You have just graduated one of the most dynamic and explosive dual threat QBs in the Commonwealth of Kentucky in Logan Nieves. I mean how do you replace a quarter-back who throws for 2,110 yards and 22 TDs and runs for another 1,008 yards from scrimmage and scores 15 rushing TDs like Nieves did in 2017? Good thing the Eagles have Josh McClurg. I mean the Class of 2020 QB, in limited varsity action last season completed 48 of 68 of his passes for a completion percentage of .7059 and 449 yards passing. Through the air, McClurg had 5 TD passes with only one interception and ran the football 38 times for 104 yards and another 3 scores. Yeah, having McClurg in the wings to take over for Nieves probably was the plan; but life rarely goes as planned, and it didn’t here either.

Don’t really know how an entire corp of Kentucky news media missed this, me included I am embarrassed to report, but Josh McClurg attended Paintsville High School this Spring and even competed in Track & Field for the Tigers. He traded in one 11-2 team competing at the Class 2A level for another team coming off an 11-2 season in the Class 1A, district 6 Tigers. But wait a minute, I thought the Tigers had a real hotshot freshman quarterback last year at the helm of its 11-2 team. Well, they sure did and his name is Jake Hyden and, next to Campbellsville High School’s Aaron Hash, he probably was the premier freshman QB in the Commonwealth of Kentucky. Hyden, over the course of his freshman campaign completed 80 of 170 passing attempts for 1,464 yards passing and 13 TD passes against only 4 interceptions.

Here’s the rub, as valiantly as Jake Hyden performed last year, it is difficult for him to stave off the charge of a Josh McClurg who is 6-1 and weighs 185 pounds, runs a 4.5 second, 40 yard dash, runs the pro-agility shuttle (5-10-5) in 4.1 seconds, and has a recorded 35 inch standing vertical leap. The rumor around Paintsville, and this is unsubstantiated, but I am going to lay it out there anyway, is that Hyden has been told that either they will use a two quarterback system and play them both or move the loser of the battle for the starting job to the defensive backfield.

In any event, however this shakes out, you have to admire the position in which Paintsville High School finds itself. To think, there are schools who can’t find one quarterback, and Paintsville has two to die for if you will pardon the pun. In addition to being loaded at QB, the Tigers also return their two most productive receivers in James and Chris Allen. One thing is for certain, no matter who is the winner in this upcoming battle for the starting quarter-back job, the Tigers from Paintsville will come out smelling like a rose, and the one’s left shoveling the crap may be the coaching staff at the fancy private school in Lexington.