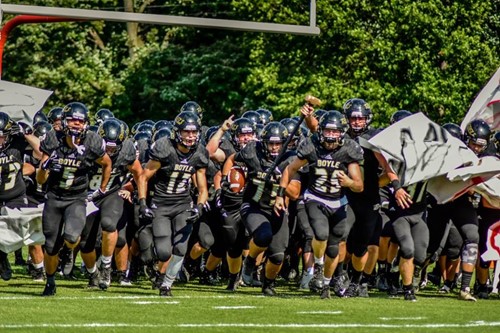 We first became aware of Boyle County’s Reed Lanter, of whom we first learned covering Team Kentucky Football, when Lanter was in middle school. After his first season under center last year, we selected him to our Sophomore, All-State Football team in November of 2017. We have covered him in this on-line magazine many times over since coming on line. As we have before said about Lanter, a Lanter QB’d team WINS GAMES! That is, after all, job one for the quarterback position. That is very good news for Coach Chuck Smith, as Reed’s back-up is his little brother, Cole Lanter. In 2017, as a sophomore, Reed led his team to a 14-1 record and the Class 3A State Football Championship. Lanter did more than manage that team and the weapons it had at its disposal, he starred on that team and was one of its most lethal weapons in spite of his being young. 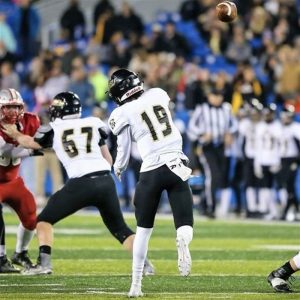 We both thought and said at the time it appeared to KPGFootball the Rebels won that 2017 championship not in spite of Reed Lanter, but rather, because of Reed Lanter. Last season, Reed passed for 2,597 yards and 28 TDs, with only 4 interceptions. He completed 181 of his 263 passing attempts for a completion percentage of .6882129. This season, being one of the focal points of every opponents’ scouting report, Lanter (thus far) has completed 170 of his 259 passing attempts for a completion percentage of .6563706. He has thrown for 2,798 yards, 39 TDs, and only 5 interceptions. Last year’s statistics, which he has already surpassed in yards and touchdowns thrown, were accumulated over 15 games. Thus far, he has played 13 games with a date in the Semis, Friday night, at Corbin; the team it beat for the Championship last year. KPGFootball believes Lanter will play two additional games and believes he will end the year with well over 3,000 yards passing and well over 40 TDs thrown.

So, how good is this junior signal-caller and how far can Big Reb Nation ride this thoroughbred? KPGFootball got to go to Belfry, Kentucky this past week-end and catch a half of his play against Belfry. We watched the first half of Pikeville-Williamsburg and caught the second half of Boyle at Belfry. We went to see iconic programs facing each other at both historic and iconic venues and weren’t, at all, disappointed. There was one play which just seemed to sum up Reed Lanter to KPGFootball and we shall attempt to describe it for you. Facing a late down, long distance situation, Lanter dropped to pass and was under a heavy rush from a Belfry defense which had elected to bring more pressure than the down-linemen alone. It looked to us as though Lanter was calmly throwing the ball away as there didn’t appear to be anyone in the vicinity of where the pass looked to be landing. Out of nowhere, a Boyle County receiver darted under the football which hit him dead in stride as he took it all the way to pay-dirt. It was a huge play as Belfry had just pulled to within 27-24 when this occurred and it lengthened the lead to 10 points on a night where the final margin would be 41-24.

Everything about that play just sums up, for us, Reed Lanter. It was a microcosm of the kid’s entire football career. He was cool, composed, and unaffected by the rush. Lanter calmly found a spot where the receiver was headed and delivered the ball to his teammate. In so doing, he gained for his team a lead which would safely separate them from the opponent trying, futilely, to catch-up. Reed Lanter is 27-1 under center for the Rebels with one Championship already with his team and him being odds-on favorites to win another. How far will the Lanter Train take Big Rebel Nation? That is really anyone’s guess; but it sure has been one Hell of a ride so far.