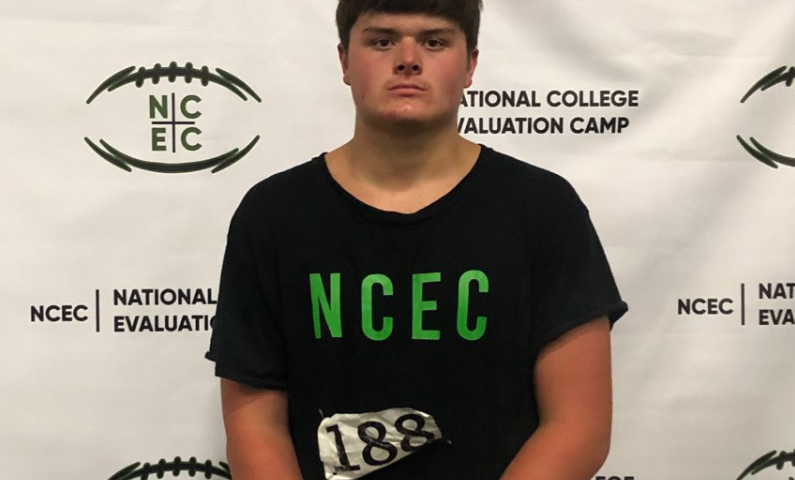 We at KPGFootball are of the opinion Fulton County’s Broc Bridges is probably the consummate DE playing football at his level of play anywhere in Kentucky’s 2021 graduating class. Here’s the rub, there are plenty of D-1’s which see him as a TE in college. He has plenty of frame and athleticism to play either place.

Broc is a 6-3, 240-pound stud who has come from some fine football playing genes. His father, James Bridges, is the head football coach at Fulton County and played collegiately himself at Murray State when it was his time to shine.

Now, Broc has already been offered by UTMartin and no one can question Coach Simpson’s eye for OVC talent. He is UTMartin’s all-time winningest football coach. He didn’t garner his fantastic record, over his long tenure at the OVC school, by being unable to predict which kids are well suited to play football at his school’s level of competition.

There are other D-1s circling Bridges in addition to Martin. We have seen Old Dominion showing Broc considerable love to go along with one of the better schools in the Ohio Valley Conference in Austin Peay.

Brock had a big 2019. He was selected first-team all WKC (Western Kentucky Conference) and was also selected to the Paducah Sun‘s All Purchase Region, 1st-Team. As all bone fide stars at the 1A level, Bridges was a “two-way star.”

On defense, Bridges had around 60-stops, 11.5 of which were for losses, to go along with 9-QB sacks, a forced fumble, and two fumble recoveries. That is fine production in 11-games with everyone running away from you as fast as their legs will carry them.

Offensively, Bridges caught 25-passes in 2019 for nearly 400-yards with 3 TD-receptions. He was also the sixth-member of an offensive line which cleared the way for Class of 2020, Caleb Kimble, to gain 1,770-yards rushing in 207-carries with 24-rushing TDs.

Kimble is gone. Bridges will have his work cut out for him, in 2020, against the schedule Coach Bridges has put-together.

Fulton County plays Union County, a tough Class 3A, first-District foe together with perennially tough Russellville and probably the class of the 1A classification on the western end of the commonwealth in Crittenden County. As if that wasn’t enough toil, they close the year with two of the top-10 teams, Kentucky-wide, in the 2A classification, playing Murray High School and Mayfield.

Bridges will get to work against the type athletes necessary to further demonstrate and showcase his talents. He will see players across from him frequently, who are, like he is, headed to college to play on Saturdays.

It will be a tough task and daunting for his teammates and him. However, from what we have seen of this young player, it ain’t no hill for a climber!