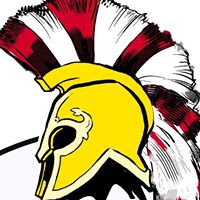 In high school football, the Kentucky High School Athletic Association recognizes 6 classifications and are in the midst of crowning 6 state champions. The KYMSFA, or the Kentucky Middle School Football Association, crowns three (3), 8th grade state football champions (Divisions I, II, and III). I suppose for either of those entities, the debate as to which ONE of the teams is the REAL STATE FOOTBALL CHAMPION is the source of endless debate. However, in 7th grade football, the KYMSFA crowns ONE state football champion and which team wears the crown, at the end of the 7th grade, middle school football championship playoffs, is never contested. It is the last team standing at the end of the day; no frills, no fuss, no debate. KPGFootball contends there can be no legitimate argument, this year, as to whom were the Kings of the 7th grade football mountain. Caudill Middle School’s 7th grade football team won all 17 of the games it played, including 4 playoff games, which Caudill won by a combined score of 158-19, on its way to the unadulterated, unquestioned, state football championship. Perhaps the only REAL ONE in Kentucky in football.

When we first got into covering football at KPGFootball, we endeavored to not evaluate kids below eighth grade. However, kids are getting looks earlier and earlier and, frankly, not even the 7th grade superstars look like seventh graders anymore. For instance, look at the picture to the left of this paragraph. It depicts Kenyatta Hardge. Kenyatta is a freakishly athletic, 5-8, 175 pound, two-sport athlete who is a ranked basketball prospect in the class of 2024 in addition to his prowess on the gridiron. Now you can’t tell me, in looking at the Les Dixon photograph, you thought you were looking at a 7th grader. Well, you will be happy to know you aren’t…the picture is a year old. Kenyatta was in sixth grade when it was taken, leading Caudill to a 7th grade runner-up to Corbin Middle School, the same Corbin who won the 7th grade Championship in 2017. Take this into account additionally…the only Team Kentucky FBU Elite player from off the 17-0 Caudill Middle School roster is 5-10, 220 pound, jumbo athlete, Ryland Rhodes. That isn’t because he was the only one deserving; he’s the only one who auditioned. At least three of the big four players on the Caudill, 7th grade roster, comprised of Brady Hensley, Kenyatta Hardge, Hayden Kiser, and Ryland Rhodes are playing basketball right now. I am sure you will see them this summer when Team Kentucky Future Stars combines. In corresponding with Coach David Hensley, he tells us I feel Rhodes, Hardge, Kiser, and Hensley are the best four players in Kentucky’s 2024 class at their respective positions.

What would he know, you ask? Well Coach Hensley has only coached for over 30 years, with 25 of those years spent on the high school level at stops like East Jessamine High School, where he went 28-8 over a three year period and then Paul Laurence Dunbar, where he coached the team while overseeing a $100,000 weight room build and the renovating of the Dunbar locker room. Hensley, stepping away in 2007, left a talent laden roster for his successor, containing between four to five college prospects many thought at the time. Paul Lawrence Dunbar was (and is still) a member of Class 6A’s-7th District at the time Hensley stepped aside in 2007. So, Hensley didn’t leave the high school level because it was too much for him. Hensley retired from Dunbar to spend time with both his family and his young children upon his own father’s passing. Hensley got back into coaching only when his own son started to play youth league. Now he’s enjoying a stint in middle school and he couldn’t be happier about it. Hensley told KPGFootball that for me, this has been the most fun coaching I have had. It places football into its most pure form. Of course he’s preaching to the choir with KPGFootball. We have covered middle school football since coming on line because we admire middle school football for being a level of football where the kids play because they love it; without the faintest thought of the next level and whether they are being properly featured.

Caudill is a team comprised of many more than it’s big four stars. Sure, Brady Hensley scored three TDs in the Championship game in defeat of McCracken 30-6, but Hayden Kiser was a two way star off the edge at both TE/DE. Eli Steele was brilliant and efficient at QB and found both Kiser and Anderson Mitchell in the down-field passing game. Parker Mullins was a run-stuffer from his MLB spot. All the players mentioned in this article have played 3 years for Caudill, according to Hensley, and amassed a 43-1 record over that period of time with 2017’s Championship loss to Corbin its only blight. We are the future for Madison County football, said Hensley, and it’s a bright future. Our goal is to keep these players headed in the right direction and working hard. Hopefully, they will compete for a high school championship like they have earned in 7th grade. Fans around Madison County would say from your mouth to the Good Lord’s ear we would suspect!

Reporting for KPGFootball, this is Fletcher Long, reminding all of the ballers, especially those at Caudill Middle School to continue to PLAY THROUGH THE WHISTLE.