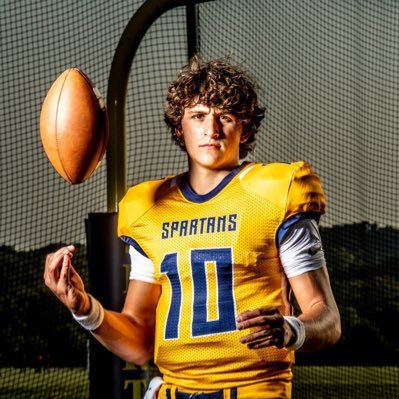 It isn’t easy being the son of a former superstar quarterback. Cole’s dad, Chad (say that five-times quickly) is a former NFL QB for 11-seasons primarily with the New York Jets.

He was a first-round selection, out of Marshall, and is the only player to win NFL Comeback Player of the Year twice. The elder Pennington is the only QB, not named “Brady,” to lead his team to an AFC East title between ’02 and ’19. When he retired, Chad Pennington was the career completion percentage leader at 66%, now second behind Drew Brees.

The Herd, which dipped into Kentucky to sign superstar, DE prospect, Darion Dearinger out of Anderson County in its ’21 class, has certainly shown an ability to pluck prized prospects out of the Bluegrass. They have successfully mined these fields before and appear resolute in its continuing. Hey, good for us!

Cole Pennington, this past Friday night, led his charges to victory against an always tough Frankfort team in the Mingua Beef Jerky Bowl played at Bourbon County High School. Pennington was 17 of 34 on the night for 231-yards, a TD, and an INT. Looking at his completion percentage over the past two seasons (71%), he had an off night.

All of that aside, the only real statistic which has any meaning, at all, to a QB is Pennington’s Sayre High School is off to a 3-0 start in ’21. The top-flight ’22 signal-caller has the Spartans sitting undefeated, as they were much of last season, while handing Craig Foley’s Panthers from Frankfort High School its first loss.

So far this season, Pennington has completed 44 of his 66 passing attempts for 577-yards passing with five (5)-TDs against a lone INT. His completion percentage is 67% and he is 11-1 under center for the private school in Lexington, Kentucky which has just begun competing in football.

Now, Sayre is assigned to district seven. Anyone familiar with 1A Kentucky football knows that district seven is the district home of both Hazard and Pikeville, the later affectionately known as “Big P.” Getting through that district would NOT be a cakewalk for any team at any classification of competition.

Having a QB who has completed 209 of his 293-passes (71% completion rate) for 2,608-yards with 32-TDs against only five (5)-picks in this last 12-football games, while leading his team to an 11-1 record over the span, is a recipe for success regardless of how hard one’s district might prove to be. Little wonder why this guy is a 3-star rated recruit at QB by major recruiting services and headed to play football for one of the hottest programs in FBS, Division I.