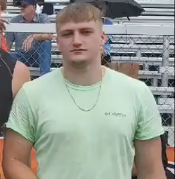 Our agents around Kentucky have tipped us off to a hot development. We hear Brenton Willoughby relocated to Barbourville a few months back and will play for Knox Central this coming Fall. He played the previous two seasons at South Laurel in London, Kentucky we have been told.

Willoughby is quite a prospect. Seen in the picture to the right, Willoughby is a real weight room war horse.

What kind of football player is he? Put it this way, he was selected a National Undergraduate Combine All-American both his freshman and sophomore seasons. He played in the game for the North squad. He has won both Game and Defensive MVP.

What kind of student is he? Well, he has a 3.8 GPA and plans to study electrical engineering.

Can’t imagine what could be holding schools back from offering right now aside from his being a Class of ’23 with two more years of development left to see how his frame might finish-out. We have it on pretty good authority Willoughby still has the staff raving about his performance in Louisville, Kentucky at the College Coaches Showcase this past weekend.

Willoughby has been a two-year, varsity starter; which is not “run of the mill” for a player who has just finished his sophomore season. Willoughby is a hard worker, which his work in the weight-room validates.

Like the 3.8 GPA, they take effort, tireless work, and say quite a lot about the character and industry of the player achieving them. Especially a player just coming off a sophomore season with plenty of off and in-season, high-school left to experience, grow, and develop.

Whether some parents like it or not, this kid’s dogged dedication to the weight room and physical development is why he is an anatomical freak of a sophomore who can clip off forties in under 4.6, run short-shuttles in 4.10, run the 3-Cone in 7.2, and broad jump 122-inches. He’s not playing over someone’s son because of some staff member liking him better. He’s playing over someone’s son because he is dedicated, has worked for it, and doggone it, he’s just better. Mystery solved, end of dictation!

Nothing has been given this kid. He’s earned every last snap and opportunity he has been afforded.

If colleges would recruit more kids like Willoughby, the ones who earn it, and not just recruit the ones who happen to fit certain naturally endowed physical criteria, they would have far fewer busts littering the sidelines on Saturdays across the football landscape. I know frame is important at some levels of play. It has become the only consideration.

It was never meant to be. You guys (college recruiters) have gone off the reservation. Just saying…

Willoughby’s mom is a middle school teacher. His step-dad is a retired police officer who works on staff as an assistant coach and a strength and conditioning coordinator. Judging from this kid’s physique, step-dad knows his stuff.

Sounds like the kind of athlete I would recruit to play for me. What about you?