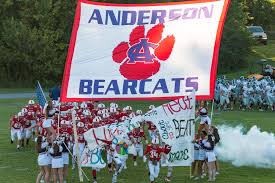 You may remember our featuring a Charles Collins, a running back who, last year as a sophomore in high school, lead Class 5A, Montgomery County, by rushing for 2004 yards in 13 games on 194 carries while scoring 29 rushing TDs and averaging 154 rushing yards per contest. Collins averaged, a season ago, 10.33 yards per rushing attempt. I also reported in the article that Collins was estimated to be in the neighborhood of 5-8 and weighing around 160 pounds. The story, should you wish to read it, may be accessed via this link. Since running that article June 2, 2018, there have been a few, very interesting developments for the best running back in the Class 5A division about whom no one outside of Montgomery County had ever heard. For starters, it has been reliably reported to me Collins has sprouted up to around 6-0 tall. Secondly, and more importantly than the first bit of information, the 2,000 plus ground gainer has enrolled at Class 5A, District 6’s Anderson County High School.

This development is remarkable in a variety of ways. First, Anderson County graduated a nearly 1,300 yard rusher from a season ago in Blake Franklin (317 carries, 1,297 yards, and 15 rushing TDs) but return Class of 2020’s Zach Labhart who gained 983 yards a year ago on 196 carries and 12 rushing TDs in 11 games played. Next, Collins will get to run behind an offensive front which paved the way for 2,957 yards gained over Anderson County‘s twelve games (in which the Bearcats went 8-4) with a backfield sans Collins. Next, you would have to expect the Bearcats, who return Kentucky’s very best DE in Darion Dearinger, Class of 2021, will be much tougher against the run than the defense which surrendered 2,107 yards rushing to its opponents a year ago. Dearinger enters his sophomore season after having made the KPGFootball Freshman All-State Football team a year ago.

What this transfer means to the Bearcats: Well, it makes an already potent ground based attack even that much more potent running behind one of the more accomplished offensive fronts in the 5A Classification. Still, the Mark Peach coached team didn’t exactly struggle a year ago running the football. For Anderson County to take the next step it still needs to develop more of a threatening passing attack than the aerial dysfunction which only netted 405 passing yards over twelve games last year. One of the 4 losses on the year for Anderson County was to Collins’ former mates, Montgomery County 33-23 on October 13th. One would have to suppose this transfer effects the rematch which will be at Montgomery County in 2018. That figures to be quite the Collins’ homecoming now for sure. Charles only caught 5 balls for 70 yards out of the backfield last season but if he has sprouted to 6-0 tall, as has been reported to KPGFootball, then he would certainly be a more attractive target in the passing game this year than last. Regardless, this transfer certainly replaces the Bearcats’ loss of last year’s leading rusher at the very least with quite a bit of change left over in the ole’ pocket.