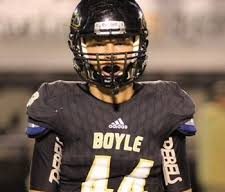 I remember it like it was yesterday. I had gone down for the Tennessee Regional of the Blue-Grey All-Amiercan High School game.  I was down there to cover it for KPGFootball as the Blue-Grey didn’t have a regional set for Kentucky and I figured Kentucky would have quite a few participants. I was right in my figuring. I was standing next to one of the coaches at the event, a very good friend of mine named Glen Campbell. Coach Campbell had obtained my services, twice previously, to coach his offensive line at the Bret Cooper Junior All-American Game in Dallas, Texas, as he has been the East All-American team’s head coach the immediate two previous years. Coach Campbell and my relationship had gone back further than that…extending back nearly 15 years.

Anyway, I am standing there with Coach when I look and see this kid leaning against a column. He has sandy brown/blonde hair, he’s wearing glasses, and he looks like he is there for some sort of chess team outing. He was wearing a Boyle County Football shirt so I went up to introduce myself to him. He took my hand in a tight death-grip and looked me in back of my eyes in a way I wasn’t expecting owing to my initial impression of him. I told him I’m Fletcher Long with KPGFootball. He said, Nice to meet you Mr. Long, my name is Tanner Crawford. I went back over to Coach Campbell and said Hey Glen, you see the kind of slight, academic team, looking kid leaning against the column? He said, Yeah, what about him? I said, What if I told you he gained nearly 2,000 yards rushing last year and scored 25 rushing TDs playing for the Class 3A Sate Football Champion, Boyle County. I will never forget Campbell’s response…The Hell you say!

You know what? You really can’t judge a book by its cover. I imagine Clark Kent looked rather disarming too, until he went into the phone booth and re-emerged as Superman. No matter what goes into the locker room to suit up at Boyle County High School on Friday night; what comes out wearing a number 44 Jersey might as well be wearing a cape. Crawford, to be exact, carried the ball from scrimmage 238 times gaining 1,928 yards on the ground with 25 rushing TDs for a team which made winning the State Football Championship in its Classification look as easy as a mid-morning stroll down a sunlight beach. Boyle County was 14-1 last year and Boyle County’s fans expect nothing less upcoming for 2018.

As for the kid’s vice-like grip, well later that day at the combine there would be a ready and easy explanation for that. The Blue-Grey Regional is a NFL Combine format so the participants have to rep the high school, bench press, rep weight of 185 pounds. Crawford repped 185 pounds on the bench press 19 times. For a kid measuring 5-11 and weighing 170 pounds, or really for any high school player at any position, that is an elite performance on that particular test. For a 170 pound running back, it is really something. According to Muscle and Strength, LLC’s Bench Press Calculator, that would make Crawford’s, one-rep, maximum lift on the flat bench approximately 294 pounds; or 124 pounds more than he weighs. Wow!

Now, I have some friends in Boyle County who are very concerned with my having obtained a vote on the AP Kentucky football team rankings. The preseason polls are right around the corner. They are upset because I have picked Boyle my preseason number 2, behind Belfry, in the poll I published on this site. I even had one Boyle County fan want to bet me that Boyle would have Belfry (my preseason No. 1) on a running clock by the second quarter. With two running backs the ilk of Tanner Crawford and AFI-KPG Sophomore All-Stater Landen Bartleson both returning to run the ball (they combined last year for 3,065 yards rushing and 45 rushing TDs) as well as AFI-KPG Sophomore All-State QB, Reed Lanter (181-263, 2,597 yards passing with 28 passing TDs against only 4 picks) back at the controls, I can see why they are confident. There is at least one more reason they are so confident and it would give me a lot of confidence too. No matter how the person entering the phone booth appears to the casual observer; Boyle County knows what’s coming out the other end. No, it ain’t no bird, it ain’t no plane, it’s…Superman!

This is Fletcher Long reporting for Kentucky Prep Gridiron reminding all of you to PLAY THROUGH THE WHISTLE!