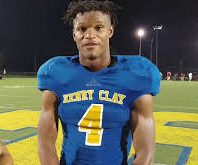 There are some players who really fly under the radar. I mean there are some players out there in the Commonwealth whom you would have to believe would be huge deals if they, maybe, played somewhere else. One of those was Taveon Hunter, who just graduated from Belfry High School, and went under valued, in our humble opinion, in spite of his breaking the Kentucky High School record for yards per rush with a minimum of 75 attempts. Hunter gained 1,285 yards last season in just 78 carries with 15 rushing TDs for an average of nearly 16.5 yards every time he touched it. Hunter was also a 11.2 100 meter track guy, so speed wasn’t the issue at all. Hunter signed with Morehead, which is a great pick-up for them and kudos for jumping on a great opportunity when it presented, but a guy with Hunter’s speed, and who averages 16.5 yards a carry, one would expect to be signing with a FBS school, wouldn’t you think?

Well, there is another Taveon Hunter type out there and he has either gone unsigned or his signing was the least covered event in Lexington history because I can’t find anything on it and I am really good at finding things. Tyree Clarke played this past season at Henry Clay High School in Lexington, Kentucky. The Blue Devils are a class 6A football team in Kentucky’s second largest city. Henry Clay is coached by Samuel Simpson and the Devils struggled a bit last season in Kentucky’s largest classification of football, going 6-6 before bowing out of the play-offs second round to Scott County. Who didn’t struggle at all was Tyree Clarke.

Tyree Clarke has an excellent frame as he measures 6-1 and weighs in at 175 pounds. He played RB, WR, and both Free and Strong Safety this past year in addition to his work on special teams as a returner. Clarke was an excellent student at Henry Clay with a 3.5 GPA and a qualifying test score (22, ACT). Tyree gained 981 yards on the ground in 148 rushing attempts for a per carry average near 6.63 yards per carry. Sure, it’s not Hunter’s ridiculous per carry average but Clarke was playing Class 6A football and we all can’t be Taveon Hunter. Clarke caught 19 passes for another 241 yards receiving and scored 3 TDs via the forward pass. Tyree scored 102 points for the Blue Devils, and on defense contributed 71 tackles, 46 of which were solos and 2 picks from his safety slot. Tyree Clarke showed his senior season that he was just a football player and he made tons of football plays. It really makes me wish I was working on a college recruiting staff because not only can you field a fine team from the talent on hand in the Bluegrass but you can field a great team from what gets left behind.

This is Fletcher Long reporting for Kentucky Prep Gridiron reminding all of you to PLAY THROUGH THE WHISTLE!