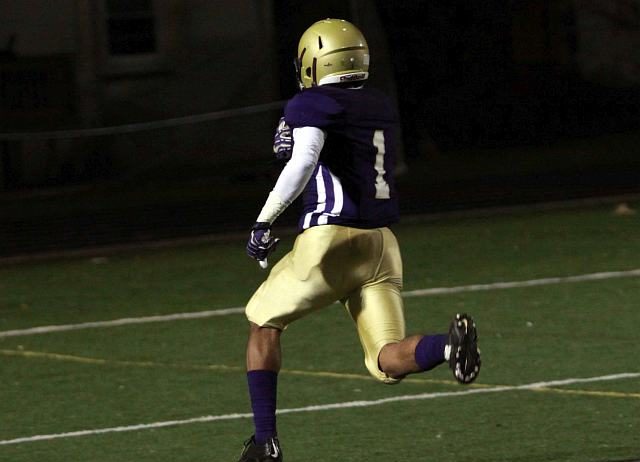 Devito Tisdale, 2020, from Bowling Green High School, is widely considered the number 1 player in Kentucky in both football and basketball in his class. Vito, as he is called, dunked a basketball in a state playoff game while a 7th grader, in traffic, so he has hops.  Vito was a RB in middle school and carried BGMS to a Division I State Championship on his over 2,000 yards from scrimmage and 34 TDs, two years ago.  What we didn’t realized at the time, but appears now to have been a bit of foreshadowing, is we should have noticed his over 100 tackles he made on defense that year.

Notwithstanding his bodacious accomplishments carrying the football in Middle School, Vito has transitioned nicely in to the Purples’ back 7 on Defense playing at BGHS a safety/OLB hybrid. Vito has a wingspan of 6’4″ and a forty time of 4.6 flat, and with his 6’2″ height and 190 pounds of substance, colleges are recruiting Tisdale as a safety, or so I am told. Tisdale has offers presently from APSU, Louisville, Kentucky, and Tennessee among others but doesn’t report a leader.

What happened to Tisdale at RB you ask?  Well, last year the Purples elected to ride the stocky 5’8″ 190 pound running back, who was the 2017 Kentucky Mr. Football by the way, all the way to the Championship in 5A. I am talking about Jamale Carothers and he has since taken his talents on to the United States Naval Academy; so one would think the RB position at BGHS would be a two man race between 2018 WR/RB prospect Ziyon Kenner and Tisdale. Why shouldn’t Kenner get a look there? All he did two years ago, as a Sophomore at Christian County High School, is gain approximately 1,600 yards running the ball. The fact Kenner followed his dad, who was hired to coach DBs for BGHS, to Bowling Green had to have been unpopular decision around the Colonel Camp.

The RB race at BGHS appears a fluid situation going forward and one worthy of both study and discussion. Well, good news subscribers, that is exactly what we plan to do here at Kentucky Prep Gridiron. In the meantime, whether Vito Tisdale plays RB or Defense, no matter, many people smarter than I like him defensively. Either way, easy to see why Bowling Green High School wins so many Championships in 5A (5 out of the last 6 years). While the coaching is superlative, the seemingly never-ending stream of big time talent stampeding through BGHS sure doesn’t hurt either, wouldn’t you agree Coach Wallace?