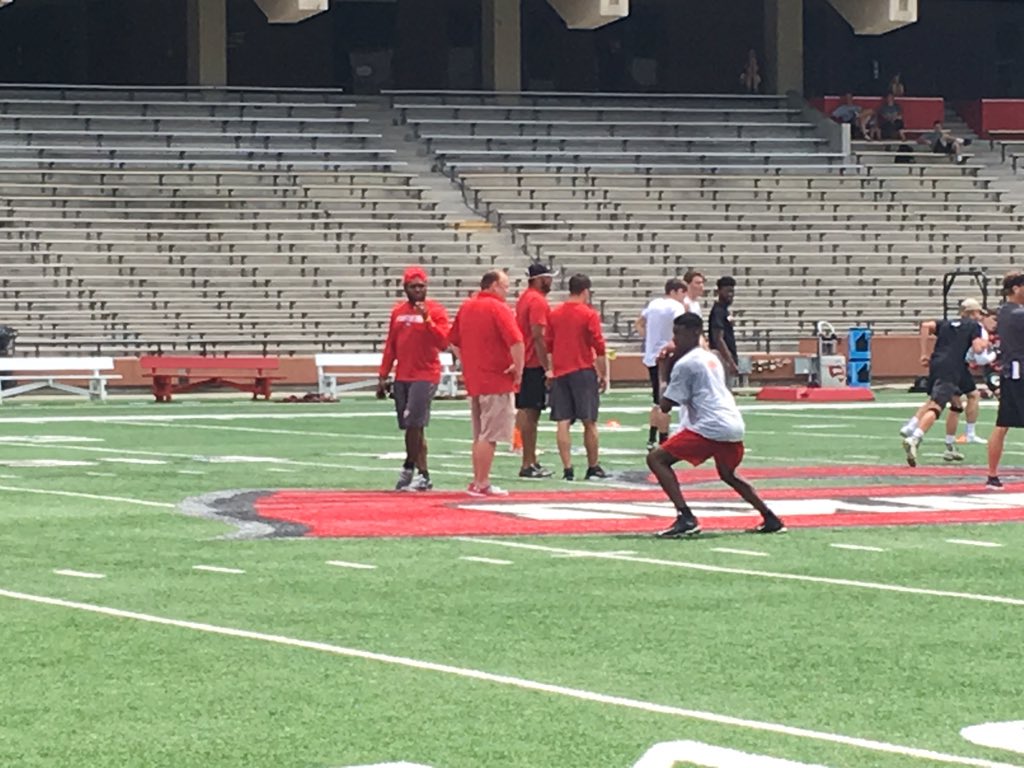 Many of us have before enjoyed watching tall, mobile, athletic, strong-armed QBs around the Western Kentucky area. Russellville fans had Rooster Woodard, who is now matriculating to High School Football (See, Russellville Rolls When the Rooster Crows…April 15, 2017, Kentuckyprepgridiron.com). Well, it would appear Hopkinsville Middle School has had one drop in its lap eerily similar to Mr. Woodard. It appears not every stud, rising 8th grade signal caller was playing for Team Kentucky Future Stars this weekend against Tennessee in the Tennessee-Kentucky Future Stars Classic.

Treyvon Jefferson, Class of 2022, went to WKU and showed Coach Spurrier what’s what at Spurriers’ two day QB Prospect Academy.  Trayvon was recognized for the longest toss of the weekend covering 50 aerial yards with a high school football. Treyvon bested any camper attending from 7th grade through rising sophomore in HS.  In addition campers were coached up in the proper way to execute 3, 5, and 7 step drops and set-ups, another part of QB skill play were Treyvon exhibited ability well past his years.

Treyvon is a 6’2″ 165 pound dual threat guy who is equally comfortable playing pro-style or moving the pocket either right or left with a run-pass option.  Treyvon exhibits an advanced skill set of squaring up his shoulders moving right or left and attacking the line of scrimmage as he keeps his head and eyes downfield searching for targets. Treyvon comes to Hopkinsville by way of moving over from Murray, Kentucky where he started at Calloway County’s Middle School team as a 7th grader.

As you may remember, the Tigers of Hopkinsville Middle School are coming off a Region I Championship and a narrow loss (38-36) to State Champion TK Stone Middle School in the State Semi-finals which was played at Lexington Bryan Station. QBs EJ Austin for HMS and Clay Games for TK

Stone put on a clinic that night, so Treyvon has big shoes to fill. EJ Austin showed anyone interested in seeing he was no joke at the position playing for the Kentucky Future Stars victorious team in the 8th grade game just two days ago in Fortera Stadium, before being held out of the second half for medical precaution.

For Tiger fans who were worried how the HMS team would ever replace a talent like EJ, never fear, at HMS, they just keep rolling along, apparently! HMS returns two, two-way linemen who played significantly and started in the playoffs in 5’10” 240 pound William Hughes (who started all year at RT for the 8th grade team) and 5’6″ 225 pound Jimmy Rogers (who tore up 7th grade games and started the Semi-Final Game with TK Stone at LT). Jimmy Rogers who doesn’t

pass the eye test positionally, is one of the most technically sound linemen I have ever seen or coached and is also a 4.0 student in the classroom. Jimmy Rogers is referred to as The Natural by the HMS coaching staff as it doesn’t seem there is anything on a football field he can’t do.  The Tigers also return Jay Dillard at RB as he has added bulk, height and speed to his game which was good enough in 7th grade to log big playing time on the 8th grade Regional Championship 12-1 team last year.

We here at Kentucky Prep Gridiron want to be the first to serve notice that not only is HMS a team with which to reckon this Fall but there may be a new Sheriff in Kentucky; and his name maybe Treyvon Jefferson. Ricco Hughes, Director of Kentucky Future Stars might well get out his pen and write down these names. As for Jefferson, notice was officially served this week-end in Bowling Green, Kentucky that HMS may not lose a step; at least at one position entering this Fall.