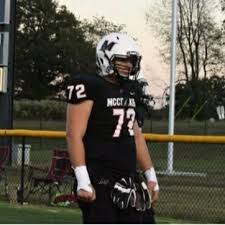 In keeping with previous years, we will come along between now and the season and feature some of the football players expected to give big performances in the upcoming season. One guy who figures largely in the offensive plans of McCracken County’s high-octane offensive attack is its left tackle, Blakley Miller.

While he is No. 72 on the team’s roster, the appointed expert on Bluegrass Rivals has him much higher on his preseason list of top Kentucky High School offensive