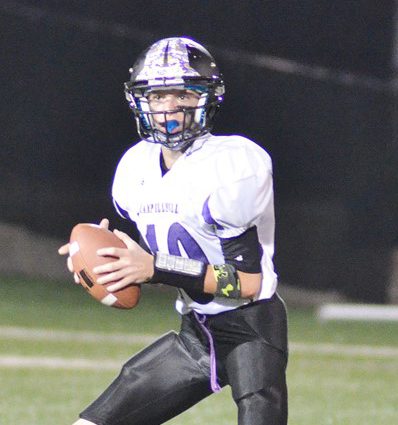 In the mode of a pure, drop back, pocket passer, Campbellsville, Kentucky’s Arren Hash is sporting a rifle hanging from his right shoulder.  Arren stands 6’1″ tall and is a wiry and nimble 165 pounds.  Arren has just enough mobility to avoid pressure but really isn’t the type of QB who thrives in an offense looking to make a living off his wheels.  Arren has played for Team KY FBU twice and for Kentucky Future Stars last year and likely again this year, as he started at QB in the 7th grade game last year.  Last year Arren was easily the strongest arm at the Louisville, KY combine and is intelligent enough to put a little touch on it when the occasion would call for it.

In short, Arren is just for what one is looking at the position in that he is tall enough to see over the line of scrimmage, has really good foot work, stands tall and delivers the ball either on a line or with a little loft, where the situation would dictate and has the intelligence to manage the game, like having a Coach on the field.  He carries out his fakes well in play action, square his shoulders to the line when rolling to his weak side before delivering the ball and attacks the line of scrimmage as he is throwing when rolling to his right.

Kentucky Prep Gridiron predicts Arren will be one of the QB’s for Team Kentucky Future Stars in Clarksville later this summer.  Kentucky Prep Gridiron also predicts Arren will see significant and meaningful playing time for his Varsity HS team this fall if not start at QB before season’s end.  Yes, I know QB is not the position where most High School’s start a freshman…but this is no ordinary frosh, he’s a future Saturday Player who always remembers to…PLAY THROUGH THE WHISTLE!