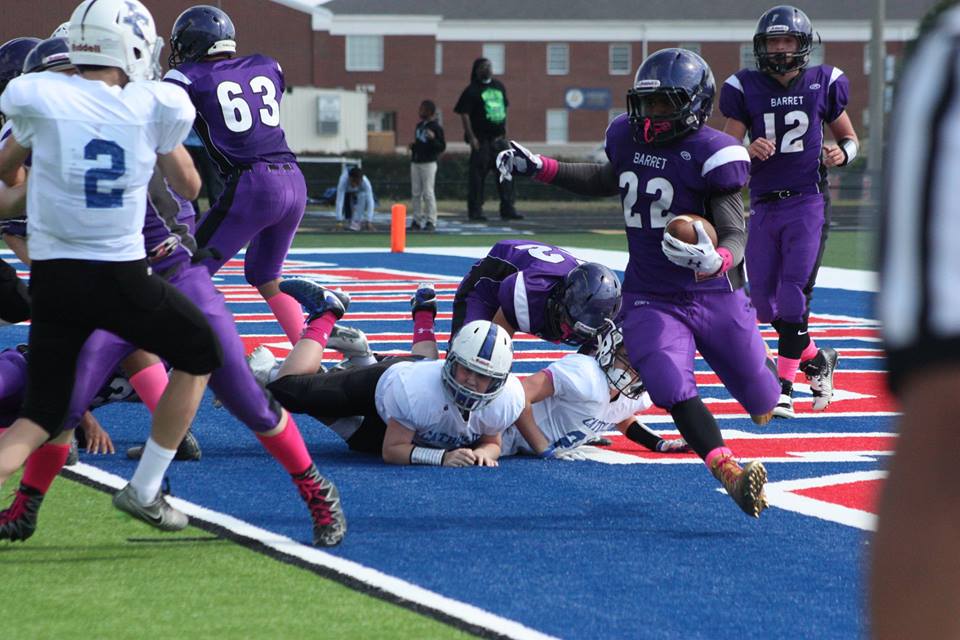 Probably the first thing one notices about Barrett Traditional Middle School’s Jaylin Bross is his extraordinary physique.  There is just no way this kid is really an eighth grader…except that he is.  Jaylin is the son of a Coach and former college football player, and the son has found his way into the weight room it would appear.  Jaylin is built low to the ground as his 5’8″ height would indicate but trying to square up and tackle his 180 pounds has proven to be quite a chore.  Jaylin has the speed and explosion (5.02 40 yard dash, laser timed; 40.2 inch standing vertical; 8’10” standing broad jump) to get the edge but he much prefers squaring up and leveling defenders.  Why, you ask?  I don’t know, maybe he is just mean….kidding, he’s a great kid.  All of the above notwithstanding, Jaylin is a down hill, sturdy, 30 carry kind of RB that just makes the defense think it might want to sign up for soccer the next Fall.  Jaylin is a kid who hasn’t been out on the Combine, Rivals, D-1, Youth-1 circuit so not as many people know of him outside of Louisville…but, buddy, let me tell you…Louisville Male is getting quite a bulldog in this kid.

Jaylin has excellent body lean, holds the ball high, tight and securely, he is fast to the second level and, once there, has the speed to take it to the house.  Kentucky Prep Gridiron predicts Jaylin Bross, who, incidentally was the West KY Game MVP this year in the East-West KY Game, will make any All-Star team for which he tries-out, including and especially the Kentucky Future Stars Team should he wish.  Jaylin Bross, will be a Varsity Letter-Winner at Louisville Male this Fall as a freshman, and is a future Saturday player.  Don’t sleep on him or you’ll get trucked because Jaylin Bross is the kind of player who makes Defenders…PLAY THROUGH THE WHISTLE!

Epilogue:  Jaylin tried out in Louisville for the Future Stars team and was going to be selected but informed the Director he was taking a trip to Europe and didn’t want to deny a worthy and available player an opportunity.  Jaylin has been selected to the Diamond All-American Game.