The first thing we ask of a QB is to just win games. Whether or not it is fair, QB’s are judged by wins and Championships and probably get too much credit for both, but who am I to re-invent the wheel.  Clay Games only led his TK Stone Middle School Team to the Div. II State Championship this year which garnered him an invite to play for Team KY FBU. 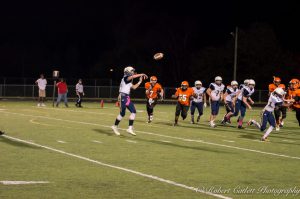 Now I want to be clear, when it comes to QBs in the 2021 class, some believe the leader of the pack amongst pro-style QBs is Arren Hash but, in the opinion of Kentucky Prep Gridiron, Clay Games may be the best pro-style QB in Kentucky as the 6’2,” 170 pounder can make all the reads, throws, and drops.  Clay sets and delivers the ball accurately and on-time.  He absolutely shredded the HMS D-backfield in the State Semis, a game in which the first to blink would lose (TK Stone 38-HMS 36).

It is Kentucky Prep Gridiron’s prediction Clay Games will make an early run at playing time for E-Town High School’s QB position early in his High School career provided he continues to…PLAY THROUGH THE WHISTLE!

Clay Games Update:  Since the writing of this article, Clay has grown and is now up to 6’3.”  I have also learned Clay is headed to a QB camp at the University of Louisville and it is expected Clay will dress Varsity this year and probably be a letterman, before it’s said and done.  Good things are happening football wise in Elizbethtown.  Clay did not try out for Kentucky Future Stars which is the only reason he isn’t on the team headed to Clarksville but Kentucky Prep Gridiron stands behind its previous opinion Clay Games may very well be the best pro-style QB in the Commonwealth with a tip of the hat to Arren Hash, who is also mighty good!