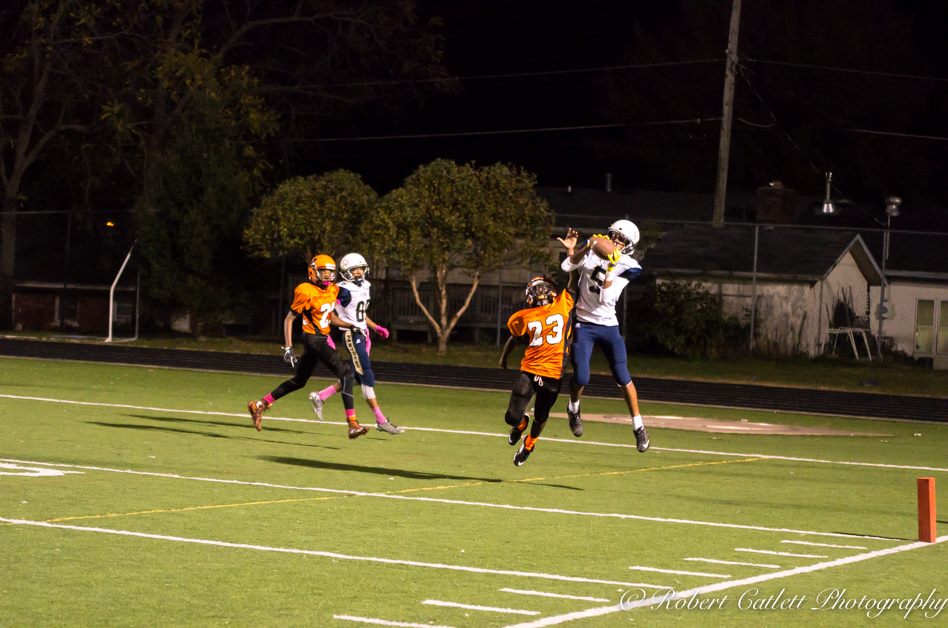 Here at Kentucky Prep Gridiron, we don’t even know what to say about Camden Williams, the 5’11” 165 WR from TK Stone’s Middle School, Division II, State Champion, Panthers Football Team.  So much for you can’t catch them all.  Apparently that is a cliche unfamiliar around the Williams household.  Coupled with Clay Games, his fantastic QB, the Games to Williams combination was unstoppable this year for the Panthers particularly in its run to the Championship to cap off a 13-0 slate.  Camden runs disciplined routes, gets off the jam well, slips into space, elevates and attacks the football at its highest point, and seemingly never catches it anywhere other than in his soft hands.  What may have been even more impressive, in spite of his gangly and slender frame, Camden glided across the middle of the field fearlessly to snag passes in the middle seam.

Whether he was running the speed out, the slant, the corner or burning you over the top, Camden Williams gives defensive backfields fits and has a polish to his routes you don’t expect out of an eighth grader.  I have coached football for years and he is the most potent weapon in the passing game I have seen on a middle school field.  Kentucky Prep Gridiron predicts, provided Camden tries out (he hasn’t gotten around the FBU or Combine circuit much), Camden Williams will easily be representing Kentucky this Summer in Clarksville, Tennessee in the Tennessee/Kentucky Game and he will slip into a High School Varsity line-up for meaningful snaps early in his HS career and should be starting as a Sophomore.  This kid should be a Saturday player provided he continues to…PLAY THROUGH THE WHISTLE!