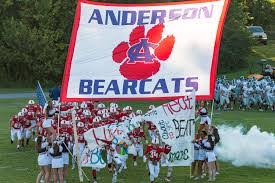 Lots of people around were very critical of letting Mark Peach go this past offseason. Coaches with 150-wins, a successful 2-year stint as a head man in college, and two trips to the championship game with one to the Semis, don’t just grow on trees after all.

Making the move even more suspect was Peach’s having finished an undefeated regular season as recently as 2018. The Superintendent’s curious comment to the Kentucky New Era in the article announcing Peach’s being hired at Trigg County High School just made the situation more circus-like and brought the school and system alike under considerable social media fire.

In a move sure to calm the tumultuous seas, Anderson has hit a home run with the hire leaked to a local media outlet today. Anderson has offered the job and the same has been accepted by a high school coaching fixture and superstar from Virginia, Patrick Henry High School’s Mark Palmer (pictured left of this paragraph). We were being a bit coy when we teased the Tweet out on our Twitter page earlier today. We are fairly sure of both the content and source of this information.

Coach Palmer started his coaching career after being a star running-back in his own right playing for Ervinton High School. Ervinton is located in the Southwest portion of Virginia. Palmer hails from the West Dante community.

After his playing days he joined Coach Dennis Vaught’s staff at now-defunct Lexington High School. Vaught and Palmer led Lexington to a State Football Championship. Coach Palmer would parlay that performance into a head coaching job.

Palmer set about reversing the program’s fortunes. Palmer went 6-25 his first three years but molded the 1A program into a perennial regional contender thereafter. Patrick Henry got the program’s first playoff win under Palmer’s guidance in 2014 continuing to see progress until the team finally played for the Region D championship in 2018.

The team broke through and won the Region D title last year, earning a birth in the Virginia, Class 1A, Semis against Galax. Palmer’s 2019 Region D Championship is the program’s only such achievement in program history.

Mark Palmer is known in Virginia coaching circles as a program builder, which he has done three times in his career, and a player developer. He will inherit a well-stocked roster at Anderson County for the 2020 season.

Anderson County boasts the commonwealth’s premier DE in Darion Dearinger. Dearinger may be Kentucky’s top 2021 football prospect on top of his prowess at his particular position.

In addition to Dearinger, whose enough in his own right, the Bearcats boast one of the commonwealth’s top two-way linemen (Ryan Stratton) and returns its QB from a year ago (Jagger Gillis). Gillis led the team in passing yards and TD passes together with being 3rd in yards gained from scrimmage and second on the team in rushing TDs.

Palmer will find a schedule which plays in one of the stronger districts in Kentucky 4A. Boyle County has had mass defections via graduation and Lexington Catholics “do-everything” QB is now playing for the Kentucky Wildcats. Bourbon County returns largely in tact and has one of the better coaching staffs in the KHSAA. The way won’t be easy.

Still, this news comes as very good news to a program that, in light of current events, could use a break. The search committee convened and moved quickly here and was able to identify an out-of-state guy with a tremendous résumé.

Congratulations to the Anderson County football family and to the players, students, fans, and faculty of the high school. You guys came into the week needing a good break. Well, fortune has smiled on you now.