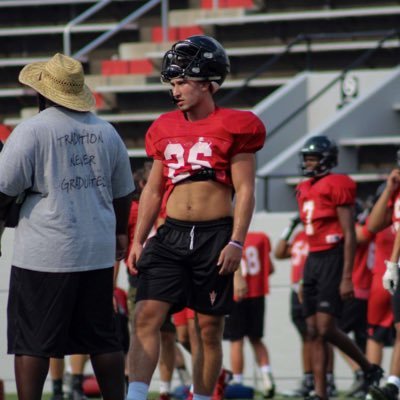 There’s an old joke with which KPGFootball has been long familiar about two fellows playing golf down in Florida. One of the players was a native Floridian while the other was on vacation. The visitor was having to constantly swat these little gnats which were buzzing around his face with enough frequency to impact his ability to play the round.

The vacationer looked at his host and said, What do you call these little bugs which keep buzzing us? The native answered, Nit-Gnats. The visitor, What the Hell is a Nit-Gnat? Well, said the native Floridian, they’re little flies prone to buzz around barns and, particularly, the rear-end of a horse. The visitor said, Are you calling me a horse’s rear-end? Floridian…Naw, of course not…then again, these Nit-Gnats ain’t too easy to fool!

KPGFootball will tell you there is a reason that joke seems germane to the instant selection of Class of 2021, Austin Gough, to the AP’s first team All-State defense. We received a call from a long-time friend, and former All-State player in his own right, and who went on to play for the University of Kentucky. He, incidentally, played linebacker too.

He said, You can’t tell me Austin Gough is one of the three best linebackers in Kentucky high school football. To which we quickly responded…that’s where you’re wrong. In fact, we are of the opinion he is THE BEST LINEBACKER PLAYING FOOTBALL IN THE KENTUCKY HIGH SCHOOL GAME PRESENTLY. Second to none…and we have watched football from Paducah to Belfry and back. We then asked him, Why do you question his selection? His response…He’s a sophomore.

So the problem for this guy with Gough’s selection, and we suppose his problem with both William Long’s selection on offense this year and Reese Smith’s selection in 2017, would be the fact they are (or were in Smith’s case) sophomores. Well, sophomores are called upon to start in varsity lineups all over Kentucky. They comprise the strength of many rosters at all six classifications of play.

They are expected to lead their teams to success and produce on the field, just like the older players. Where the sophomore’s performance is extraordinary, and merits All-State recognition, sophomores (and even freshmen) are just as entitled to recognition as seniors.

At KPGFootball, we don’t vote for one player over another, in the AP or any poll in which we participate, simply because one of the players has achieved “involuntary respiratory function” for a longer period of time. What one does on the field is an achievement. On-field production requires work, sacrifice, and effort.

Being born earlier than someone else isn’t an achievement. It requires nothing from the first-born. It requires no work, no sacrifice, and no effort. Events which just happen naturally, and aren’t earned, will never be rewarded by this magazine over a younger player’s production. Never! Ever! We hope we have made ourselves clear.

The evidence of Gough’s being one of the very best LBs in 2018 is myriad. Borrowing from an excellent article appearing in the Owensboro Times and written by Ryan Richardson, which we linked here…Gough, primarily playing linebacker, led the Red Devils with 131 tackles, which KPGFootball has learned set a new team record for tackles in a season by a Red Devil defender. This isn’t some fly by night, Johnny come lately football program either. We are talking about a program which has won 4 State Football Titles, been runner-up 3 times, has 9 undefeated seasons, and has won over 750 football games. So, when you start saying he’s tackled more ball carriers, this season, than any player who ever wore the uniform, where that uniform is Owensboro Senior High’s, well…that seems worthy of selection by itself.

For Gough detractors, it doesn’t end there. Gough ranked third in Kentucky in 2018 with 10.9 tackles a game in helping lead his team to a 10-3 mark and its first win over Bowling Green High School since 2008. Gough had a pick-six he returned 45 yards, two fumbles both forced and recovered, and a pair of QB sacks. Against Bowling Green High School in the playoffs, when it was win or go home, Gough posted 13 tackles, 4 for a loss, 2 QB sacks, and came in at fullback to pick up a first down which sealed the game for his team.

Gough, whose highlights are linked here, is 6-0, and weighs 201 pounds. The Class of 2021 prospect, like the sophomore who joined him on this first team (William Long) is both an anomaly and, somewhat, of an athletic freak. Gough bench presses 300 pounds, Squats 410 pounds, reps the college bench press weight of 225 pounds, 12 times, runs the 40 in 4.68 seconds, and has a 32-inch standing vertical leap, completely corroborating his reported 40 yard dash time.

In conclusion, coming back full circle to the funny story which started this article, are we saying Austin Gough is a first team, All-State linebacker, and, therefore, one of the three best linebackers playing high school football in Kentucky today? Well, actually, yes we are. However, even if we weren’t, the Kentucky press corp which votes for the AP All-State Football team, has said it. Remember, the Nit-Gnats of high school football, the working media; whom tend to congregate around high school football stars like gnats buzzing around a horse’s rear-end, ain’t too easy to fool. After all, they are way more familiar with this barn yard than any visitor.