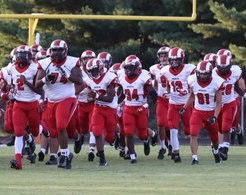 Man this pandemic sure stunted both the development and profiles of many great young players around the commonwealth. It is one reason many of us around the magazine were in favor of SB 128, or Senator Max Wise’s “School Re-do bill.

That bill has passed through two committees and two floor votes in the respective chambers of the Kentucky legislature and is on the Governor’s desk. It had scant opposition. If the Governor were to veto it, it appears to have ample support to override. He might as well sign it.

That’s enough about politics. We don’t do that here.

The point of the bill, as we understand it, was to give kids who lost a year an opportunity to get back what was lost. It’s for students first, then athletes.

We don’t know why the Johnsons named No. 34 “Joshua.” We weren’t there at the hospital when he was born.

We do know the biblical, Joshua (which may also be spelled with an “H” on the end of it, same name, same namesake) led the Israelites out of the wilderness into the “Promised Land,” crossing the Jordan River as if on dry ground. Exodus 3:16, The Holy Bible. There are some undeniable and, perhaps, unavoidable potential parallels.

Josh (a known short for either “Joshua” or “Joshuah”), Class of ’23 (for now), lost an opportunity to launch himself even more forcefully into the discussion of best in his class. DuPont Manual only played 5-games, and he was, after all, a sophomore on a Class 6A roster playing in the toughest classification of football about which the commonwealth can boast.

Still, Josh found himself on the field and he produced. Listed as a DL/FB (which tells you all you need to know about his ‘wheels’), Johnson was third on the entire team in TFLs and among the leaders in tackles, in spite of limited action. Johnson is 6-1, weighs 265 and is a grown man in spite of his still being a sophomore at present and a junior in ’21, unless he chooses to “Re-do” this past year.

Like so many stars of his generation, Johnson has learned it isn’t enough to get to the next level to just be a good football player. One has to be stellar in the classroom too. These universities aren’t just “handing out the moolah,” they want to know there will be an institutional return on the investment.

Joshua Johnson is sporting a 3.2 GPA at a school known for challenging its students academically. We don’t know what his test score is, students don’t generally test before the Fall of their junior years, but his performance, to date, leads us to believe that score will be stellar too.

It is our understanding the Crimsons call Johnson “Bus.” Well, the Crimsons look bent on boarding that bus, here in the near future, hoping this Joshua[h], the one also named “Johnson,” will take his figurative tribe of “Crimson” Israelites all the way to their own Promised Land.