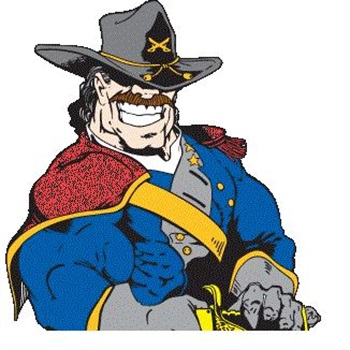 Looking on the bright side, quality football players come along who can change a school’s fortunes quite drastically. One of those players whom KPGFootball believes may well be a reason for optimism, going forward for the Generals, is McKee, Kentucky’s Nicholas Baldwin.

Baldwin only got 4 games run at the QB position during Jackson County’s 1-9 campaign. Now Baldwin played at a variety of other spots offensively and defensively, but only 4 games under center. In spite of the four game run, Baldwin still finished as Jackson County’s leading passer this season.

Baldwin completed 63 of his 105 passing attempts for a 60% completion percentage. He passed for 687 yards (171.75 yards per game/over the 4 games) with a TD pass offset by his 4 thrown interceptions. Okay, the TD/Int. ratio is less than ideal, but, assuming the same level of production over 10 games, Baldwin would have been a 1,700 plus yard passer; and that amounts to a fairly potent passing attack. Defensively, Baldwin registered 29 tackles and recovered a fumble from his LB slot.

Without question, Jackson County will need a lot more Nicholas Baldwins on the roster, in 2019, to turn around its fortunes significantly. Baldwin is a 5-10, 170 pounder who runs the 40 around 5 flat and shuttles in 4.77 seconds. Baldwin has a vertical leap of 23 inches with a bench press of 185 and a back squat of 375 pounds. Maybe his most impressive statistic is his 3.57 overall GPA. He’s an athletic kid who make plays and the Dean’s list both of which are highly sought commodities by football coaches with whom KPGFootball regularly converses.

We believe there to be better days on the horizon for this Class 3A, 8th District program. We believe this particular two-way football player will be the foundation upon which to set the cornerstone of this football program, at least in the immediate future. Remember the name Nicholas Baldwin as we believe he will be the architect of brighter prospects for the diehards supporting football in McKee, Kentucky.