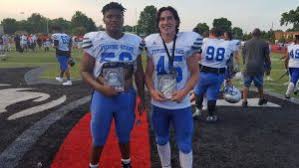 We have before talked about the incredible amount of talent Kentucky has in its 2021 Class of football prospects. We at Kentucky Prep Gridiron have published a 5 part series on it entitled, in relevant part, Plug-In Players. The talent around the Bluegrass is really deep with explosive, powerful, fast athletes all over the Commonwealth. Team Kentucky FBU made it to Naples, FA and had a chance to win the National Championship in Middle School Football, finishing 6th in the country. Team Kentucky Future Stars beat Team Tennessee for the 2nd consecutive year in the Tennessee-Kentucky Future Stars Classic in a series that was, once, decidedly Tennessee’s. There are plenty of fantastic LBs in the 2021 Class who are starting Varsity at their respective schools from the 2021 Class. There’s Preston Spurlock starting at MLB for Leslie County and Seth Mounts, who was running first team at Belfry until injury shelved him, at least temporarily. There’s also diminutive, but fantastically athletic, Isiah Forrest at 5A power Christian County High School pushing to get in the line-up on Friday nights. There are two, however, who appear, at least for the present, to have separated themselves from the pack.

Austin Gough, 6’1″, 215 pounds, MLB, Owensboro Senior High School: What can be said about Austin which hasn’t already been said? Austin played running back this summer in the Bret Cooper All-American Game in Dallas, Texas and helped lead the East team to the victory behind his 150 yards rushing from scrimmage. Austin was denied the Offensive MVP by its being awarded to Shane Hamm from Youngstown, Ohio. Shane played very well too and was deserving as he is listed, consistently, among the top 5 dual threat QBs in the Country by recruiting services; however, the award could just as easily been awarded Austin. I was on the coaching staff and can say that. Funny, Austin’s play at OLB (perhaps a bit of foreshadowing) stood out there too. Austin was the Offensive MVP of the Tennessee-Kentucky Future Stars Classic this past Summer in Clarksville, Tennessee for his play at RB. Austin has been hand timed in the 40 between 4.7 and 4.8, is a triple-jumper in Track & Field, together with being the Turbo-javelin State Champion, and is a standout in basketball and baseball. Quite an athlete. Through the Red Devils first two games, Austin has recorded 23 Tackles, according to reddevilsfootball.org. As you would probably surmise, 23 tackles in the first two games leads the team. He not only starts at LB for one of the most storied programs in the history of Kentucky High School Football, but is presently its leading tackler. Hard for those numbers to not, somewhat, sway one’s opinion.

Justice Thompson, 6’1″, 235 pounds, MLB, Louisville Ballard High School: Justice Thompson who is listed at 6’0″ 225 on Ballard’s roster is listed both shorter and lighter than he really is. He is just a monster who, I promise you, is much closer to the stature and weight we have guesstimated than what the Ballard coaches have listed. Justice starts at the Mike (MLB) for Louisville Ballard High School. The Bears compete in Kentucky’s highest classification of football, 6A, and count Louisville Male and Trinity among its chief rivals. This summer Justice anchored the Kentucky FBU team which traveled to Naples, FA and finished 6th in the FBU National Championship Tournament. Afterward, he came home to Kentucky and took over the defensive side of the ball in the Tennessee-Kentucky Future Stars Classic. Thompson’s play in the 4th Quarter largely resulted in his being selected the Defensive MVP. His HC at Future Stars is his Defensive Coordinator at Ballard, LaKunta Farmer. Farmer had this to say about his freshman, 6A, starter in the middle…Justice will be one of the best LB’s I’ve coached before he graduates. He is very strong and knowledgeable on the field. Uses great technique and fundamentals on every play. The thing that sets him apart from others is his natural instinct to find the ball carrier and bring him down. Like I have said about Austin, I have enjoyed the benefit of watching Thompson play and, again like Gough, I would add his incredible speed and explosion to the attributes Coach Farmer notes. Justice is not quite as fast as Gough but he has been consistently timed in the 4.9s in the 40, which is really fast for his size and at his age.

So who’s Kentucky’s best linebacker? Well, I could cop out and say that Justice is the best MLB in the 2021 Class in Kentucky and very few people would argue with me. I could project Austin as a OLB, though he plays MLB now, and call him the best OLB in Kentucky’s 2021 class and very few people would argue with that, as the statistics in this young season would tend to suggest. We aren’t going to take the easy road here at Kentucky Prep Gridiron. I am going to give the edge to Austin Gough, at the wire, by a nose.