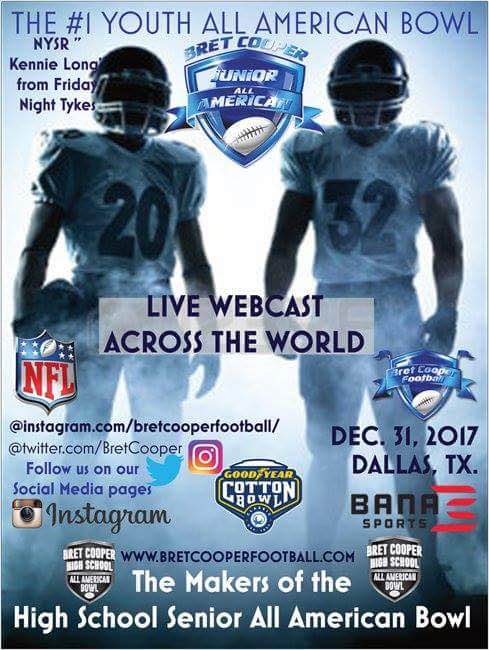 Two area Middle School football players have been initially released on the Bret Cooper Junior All-American Game Watch List. This signifies the players have been identified by the selection committee as players the committee will monitor going forward to determine whether their ability and scholastic achievement are sufficiently excellent to warrant their inclusion in this years’ edition of the East vs. West Junior All-American football game which will be played in Dallas, Texas this December. The game, which is 9 years old, has helped propel nearly 80 players, as of 2016, into full scholarships to FBS, Power 5 Conference Universities and has hosted such former Junior All-Americans as Christian Kirk, Texas A&M; CJ Sanders, Notre Dame; Tate Martell, The Ohio State University; Erik Swenson, Oklahoma; Shane Simmons, Penn. State; Armani Hooker, Iowa; Sacha Killeya-Jones, (playing basketball) Kentucky; Koy Detmer, BYU; Brian Dawkins, Jr., Clemson; and Tobias Little, Louisville.

The Bret Cooper Junior All-American Game is one of the more prestigious All-American games and the only one which factors in a student’s academic standing and ability into its selections. I was able to interview Bret Cooper in regard to the writing of this article and he told me the following:  Fletcher, colleges are really concerned with a future player’s well-being and whether they are getting value for the scholarships they offer. If a school offers a kid who the University can’t keep eligible or enrolled in school because of either grades or character issues, it’s bad for the kid and a poor investment of its Athletic endowment. What makes our game different and attractive to college recruiters is that we showcase athletes who put academics first and are virtually guaranteed of being qualifiers. These days, Universities find that a valuable service.

The following two players have been placed on the committee’s official watch list:

Evan Kelley has been excellently coached and is now under the direct tutelage of Rivals’ Evaluator and former college and NFL QB, Jonathan Quinn at the Davidson Academy. Evan is a QB who has tremendous polish and is able to make quick recognition of alignments and coverages permitting an ability to work speedily through his progressions and deliver the ball, on time and to the correct recipient. Last year, the East All-American squad was led by All-American and very highly rated signal caller from Youngstown, Ohio, Shane Hamm. The committee has Kelley on its watch list going forward because it believes the East team this year would benefit from many of the same attributes from Kelley from which it benefitted while Hamm was leading it to victory over the West and earning the game’s MVP distinction.  Kelley has been timed in the 4.9s by hand in the 40 and has the heft and strength to lower his shoulder when he breaks containment and either run away or through 2nd and 3rd level defenders unfortunate enough to attempt to tackle him in the open field. Hmmm…sound a little like Shane Hamm perhaps?  Dropping, setting up, and delivering the ball is Kelley’s true forte as he is a pro-style QB who just happens to be a super athlete. Kelley has the strongest arm, quickest release, and most accurate delivery of any QB this reporter has seen in the three years I have coached and watched football at this level of play. Kelley has a 3.9 GPA.

William Hughes is a kid who started every game last year on HMS’ Region I Champion, State Semi-Finalist, 8th grade football team as a 7th grader. Now in 8th grade, and two games into the season, where he is playing for both the 8th and 9th grade Tigers, William has stepped his game up considerably. Hughes, at 240 pounds, is really fast and athletic to go along with his being explosive and strong. At OL, Hughes has proven to be an accomplished pass protector from his LG spot. In the run game, he is a downhill, drive blocking machine.  William is persistently driving his man deep into the Defense’s 2nd and sometimes 3rd level. At DL for the Tigers, Hughes has been un-blockable. Hughes has shown tremendous launch and get off working in tandem with active and violent hands shedding and discarding would-be blockers. The best way to describe it is he’s by the opposing OL and into the backfield, so quickly, I believe he may just get a hand-off or two before the season is spent. Hughes also boasts a 4.0 GPA.

I was able to speak with Bret Cooper about the inclusion of Kelley and Hughes on this year’s watch list for his annual game and Bret said, These two young men, in their playing ability and academic standing, represent the very best in Middle School athletic and academic performance. They are the exact type of player we exist to promote. We have mined their areas before, very successfully, with players like Gough and Long last year. We fully expect Kelley and Hughes will continue the tradition of excellence established by the former Junior All-Americans who have played previously should they eventually gain selection.

Any area coaches out there who believe they have players worthy of nomination, go to https://www.eventbrite.com/e/nomination-page-bret-cooper-2017-junior-academic-all-american-bowl-tickets-31278460718?aff=erelexpmlt and provide the requested information together with film permitting the selection committee to make a full and fair evaluation. This is Fletcher Long reporting for Kentucky Prep Gridiron reminding you to PLAY THROUGH THE WHISTLE!

Post Script: The following are former Bret Cooper All-Americans who are playing college football or have received offers: