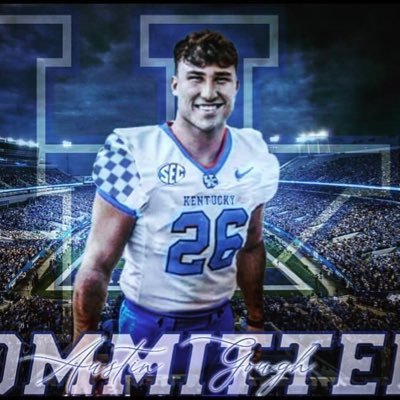 This pandemic recruiting season is unlike any which has come along before it. FBS schools have many of the seniors returning and there are more players in the “transfer portal” than in any previous year.

Transfer portal kids have immediate NCAA eligibility regardless of where they elect to transfer. The NCAA hasn’t granted any of its member, FBS programs relief from the 85-scholarship limit. FBS schools are not permitted (unlike FCS) to give anything apart from a “full-ride” and many programs just don’t have the roster space.

All of this means that solid D-1 guys, who in any other year are “full-ride” guys, are having to get creative if they still want to play at the FBS-level. Kids around the country are doing just that.

That brings us to Owensboro Senior High’s Austin Gough. Gough had multiple D-1, full-ride offers which got pulled when the roster space issues reared its head owing to the moves the NCAA made to attempt to be fair to the athletes already playing at that level, without consideration given the “up-and-comers.”

We have called Gough the biggest “walk-on,” though Gough is a “preferred walk-on” with the difference being Kentucky has him a locker and a spot on the team ready to go, since Allan Houston, who was just a “walk-on.” Houston, from Louisville, Kentucky “walked-on” at UT to play basketball so his father, Wade, could use that scholarship to improve the roster.

Houston is the leading scorer in Tennessee history in basketball. Houston was an All-Star in the NBA numerous times.

Will Austin Gough accomplish similar feats as Allan Houston? No one can predict it, but if talent, ability, and on-field production have anything to do with it, I would hate to bet against it.

Gough has incredible physical gifts and reminds us, at the magazine, of Kash Daniel, if you’re looking for a “play-a-like, look-a-like” type of former Big Blue linebacker. Don’t believe us? We have his highlights linked under the pictures to the right of this article.

As for what he can do on the field, consider this…in what amounts to three (3) seasons, missing nine games in 2019 to injury and another 3-games in 2020 because of Covid-19 (team was 12-1 but the December 4th win over Fairdale was a pandemic forfeiture), Austin Gough left the Owensboro program its all-time leading tackler. Gough made 413-career tackles (210 solos, 203 assists).

Owensboro is a 5A football team and one of Kentucky’s elite high-school programs. Austin Gough had the 3rd most tackles ever recorded in one season in 2018 (as a sophomore) and had the 6th-highest tackle output in a single season in 2020, a year when the team only played 11-games on the field and, in a normal season, would have gotten 15-games worth of run.

In 2020, Austin helped lead his team to the Class 5A, Kentucky High School football title game. He had an incredible performance on the biggest stage, under the brightest lights, playing for the Kentucky title.

We watched the championship game against Bowling Green High. It looked to KPGFootball as if Gough was making every tackle sideline to sideline.

Again, we aren’t saying anything we are unwilling to prove. Look under his picture above right, we have linked you to highlights from his championship game performance.

Here’s the bottom-line for the Big Blue Nation. You’ve have gotten very fortunate here and you know it.

In any other year, this is player costing a school a full-ride, even at the FBS-level. Kentucky is getting Gough for free because he loves the Wildcats, has dreamt of playing there, but more particularly because of a once-in-a-generation type circumstances centered around a world-wide global health crises.

This is a kid who won’t be “walking-on” very long. As with our other predictions, remember where you first heard this.