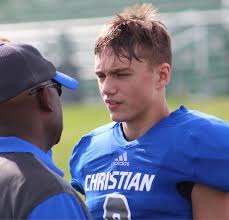 If I hadn’t of seen the video for myself, I would have never believed it. When I first examined Tyler Morris‘ Hudl page, before watching his highlights, I thought it has to be a misprint. How can a Team Kentucky linebacker, a guy fast enough to be listed at FB for his offensive position, be a defensive tackle? From what I saw on film, Morris was deployed a ton along the defensive interior line from the under 3 all the way to the zero technique. The deployment must have been a boon to the LCA’s (Lexington Christian Academy) defensive deployment. I mean, all they did, as the picture to the left of this paragraph would certainly exhibit, is win the State Middle School Football Championship in it’s division over Pikeville. It’s not as if he didn’t play linebacker at LCA, because he certainly did. It’s just that this is a football player who is so versatile you can request him to do anything football related from playing with his hand in the dirt to punting the ball I would suspect. He’s just a football player.

Now LCA has three stud eighth graders coming up from out of the 8th grade ranks whom figure to plug-in to the varsity roster immediately. Any or all of the three may even make the opening two-deep before Coach Ethan Atchley’s Eagles Class 2A, perennial powerhouse, even reaches district 7 play. Frankie Knight, Xavier Brown, and Tyler Morris all are the type of Junior High talent which continues to sustain winning programs. Knight ran one of the fastest forties, among 8th graders, at the Team Kentucky Future Star combines. Brown is one of the premier two-sport athletes in the Commonwealth, also being one of the top basketball players in the Bluegrass in the class of 2022. Tyler Morris, who is on Team Kentucky this summer, will play against Tennessee in the Tennessee-Kentucky Future Stars’ Classic at Georgetown College this summer. Tyler Morris will, upon arriving at the Team Kentucky camp at Morehead State University, join Coach Vincel Anthony’s linebacker corp.

In talking with Coach Anthony on prior occasions, he has told me he needs outside linebackers who are quick, strong athletes possessing the versatility to attack quarterbacks, stop the run, and drop into coverage. There were highlights of Morris at linebacker, as he didn’t play along the front all the time, and we saw video evidence of Morris performing all of the above very well, especially his ability to drop and cover in the passing game. We watched compelling video evidence Morris has the ability to drop into coverage, even as far as the defensive third level, to cover the deep or back third of the field. Morris maintains good inside position, runs stride for stride with the deep seem, and attacks the football in the air, at the high point. With 50/50’s, we saw film evidence Morris will battle for the football and win.

In the end, this is an athlete who has the athletic characteristics for which coaches seek when deploying personnel at OLB. We believe his being set to play OLB for Team Kentucky is an excellent deployment of talent and where Morris will play for Coach Atchley’s Eagles when he gets to the varsity roster next Fall.