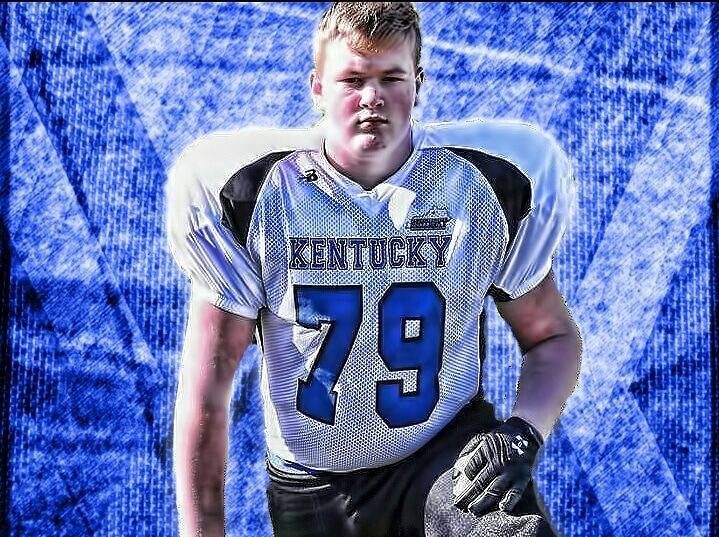 When you stare into the eyes of Louisville’s Landon Nokes you seem to get the distinct impression he doesn’t much care for you. Some people just have the look of serious business. Couple that with the fact the 6-2 inch 244 pound, 2022 prospect is already being checked out by FBS, power 5 schools like the University of Louisville, and it begins to make one a little uncomfortable resting under that seemingly disdainful glare. It might make one a little uneasy. That is probably a good thing. One might do well to tread carefully around the Class of 2022’s top ranked interior offensive lineman. If you didn’t know better, you would swear he is a full grown man. He’s certainly built like one. I am sure Landon is the nicest young man on the planet, and a real teddy-bear as his mother would probably say, but that doesn’t mean I want to align across from him.

Landon just exhausted his eligibility at the middle school which feeds the Class 6A, District 4 high school in the heart of Louisville, Kentucky’s Midtown neighborhood. Eastern has some 2,000 or so enrolled students so there usually is plenty of talent roaming the hallways and enrolling in the freshman class each year. That is a good thing for Coach Justin Blanford because last year’s team, which finished 5-6 and was bounced from the playoffs in the first round by Campbell County, lost 27 or so seniors from off a roster which turned in a very blasé 2017 performance. Still, in spite of there being a steady stream of talent, you don’t get young bigs with Landon Nokes’ pedigree coming through on a regular basis.

Nokes is a 2X member of Team Kentucky Future Stars, has played for the Team Kentucky FBU squad, and has played in the East-West Kentucky All-State game. In other words, Nokes has donned the uniform of every Team Kentucky in existence. I know Coach Lakunta Farmer will be thrilled to have him anchoring his offensive front, from the center hole, when he opens camp at Morehead State University in the latter part of June. It is interesting to note that Eastern High School has already listed him on the varsity roster on MaxPreps. Guess there is no need in hiding it…he’s headed straight to Friday Nights.

Landon Nokes is the ideal middleman because he is athletic, has the speed to get outside on pulls, the strength to grapple with enormous defenders, and the niftiness to throw numerous blocks on the same play. Nokes has really good hands and quickly transitions his hands from snapping the ball to bull-rushing linemen stationed over top of him. Nokes is also smart and able to quickly gain command of the plays Coach Farmer will be trying to install for the game with Tennessee and the playbook he will be expected to learn for his coach back at Eastern High School. Nokes is equally adept at creating holes for the running game as he is at insuring the QB has adequate time to get off his passes downfield. In short, Landon Nokes is serious business as his playing career, thus far, has demonstrated he is serious about the business of playing football.