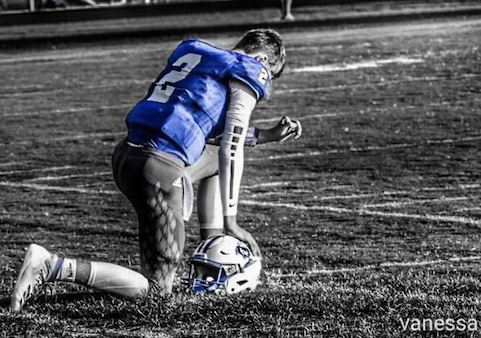 Just when we think we have caught our collective breath at KPGFootball, another rash of commitments come cascading down like Niagara Falls. Within the last 48-hours, three more top in-commonwealth ’21s have pulled the trigger.

Two of the three players we have before featured and one of the three has just been awarded the Protein-packed Performer of the Week by Mingua Beef Jerky Company just a matter of a few weeks hence. We forecasted Pendleton to the Georgetown Tigers, by the way, and are pleased to see that go the way we thought it would.

Again, top talent is jumping on board smaller programs instead of waiting around and determining what the larger programs might do. There is a ton of uncertainty out there and many ’21 prospects have decided to gather ye rosebuds while ye may, so to speak.

Nick Baldwin, pledged to Thomas Moore (NAIA): First off, we will take a look at the first of the three we featured. Nick Baldwin (right) is a kid we wrote about way back in July of 2018. Nick has pledged to play his football at Thomas Moore.

Thomas Moore is a Catholic school which competes at the NAIA level and also boasts the highest starting salary for graduates among Kentucky colleges or universities. Is that a reason to go there? Sure, why wouldn’t it be? You are going to college to set yourself up to make a living after college, right?

Baldwin is 5-11 and weighs 180-pounds and is a versatile athlete. He also stars in baseball for his high-school, Jackson County.

Baldwin has had extensive work at QB during his prep career. He camped as a QB and quarterbacked several elite Sevens teams.

He played more free safety over the course of an abbreviated senior season. He led his team in passing, TDs passing, was 4th on the team in total tackles, and led the team in both interceptions and passes successfully defended.

Baldwin is a plus athlete and a heady player. We believe he will start out in the defensive back-four as the “QB of the 3rd-level” a.k.a. “playing safety” at Thomas Moore.

KPGFootball Assessment: This is a heady player with tons of moxie and swag. We don’t see him as a next-level QB for Thomas Moore, though we realize he played there in high school. When we watch his film, we think he’s a kid a program gets to about 200, weight-wise, and turns loose “bringing the thunder” up from the defensive backfield, getting down-hill defending the run as a SS or even a “Jack” LB.

Connor Baker, pledged to Centre College (NCAA, D-3): We have never before featured this prospect and none of us around the magazine have the first clue why. Watching his highlights, we love him. He has a ton of athleticism and versatility.

Centre College is considered Kentucky’s premier academic school and one of its more difficult into which to gain admission. Centre is historically one of the premier programs at its level of play. Historically, they are credited with having won 2-national titles.

Baker is 6-1, 175-pounds with plus length, explosion, and agility. He is listed as an “Athlete” and man-o-man is that ever an apt description of this cat.

We watched film of him in the backfield at running back, aligned in the slot as a receiver, at QB in both conventional and “wildcat” packages, and at safety in the defensive secondary. We have no idea what Centre’s plans are for his deployment but the possibilities are practically limitless.

Barker only got to play in 5-games as a senior. The team played 7.

In 2019, Barker was the team’s leading passer, led the team in scoring (11-games he had 10-rushing TDs, a two-point conversion, and a safety), and tied for the lead in interceptions and fumble recoveries. He was near the top in tackles.

KPGFootball Assessment: Why we have never before evaluated this guy is a mystery to us. Maybe we aren’t as thorough as we like to claim. We love this kid’s headiness, length, twitch, and aggressive play. He reminds us of what the late Paul Bryant said about the late John David Crow; when you need six-yards, this guy gets you seven or eight.

We don’t see this kid playing any QB at Centre. The Colonels are loaded-up with talent there already with what they have already rostered and a QB out of Pope John Paul II (Hendersonville, TN) committed in this ’21 class. We wouldn’t be surprised to see him settle in at safety, or work the middle offensively, in between the second and third levels of the “throw-game.” Versatile athlete who can do many, many things.

Wilson Pendleton, pledged to Georgetown College (NAIA): We have been spilling quite a bit of ink on this particular prospect. Our selection committee for the Mingua Beef Jerky Protein-packed Performer of the Week just recently selected him for what has fast become among the most coveted awards regularly given high-school athletes across Kentucky.

Georgetown College is among Kentucky’s more elite colleges. It is one of the more selective in the admissions process.

Georgetown competes at the NAIA level. That being said it is one of the most storied and successful programs at that level of play. The Tigers have before won 3-national titles.

Pendleton is 6-3, weighs 235-pounds, and played in high school from DT to DE along the Ryle front. He figures to play end in college, though his beefing up some and sliding inside wouldn’t be out of the question.

In 2020 for the Raiders, Pendleton had 69-tackles, 12-TFLs, 8-QB sacks, and forced a pair of fumbles. The 20 defensive plays in the offensive backfield told us Pendleton is aggressive and certainly not getting driven back into the defense’s second level. His forcing fumbles told us he arrives at a ball-carrier in a foul mood.

KPGFootball Assessment: This kid has a lot of “bend” and is awfully “twitchy.” His weight room numbers bear testament to this (Bench-290 pounds, Power-clean of 305, squats 470).

Kid has a ton of leg-kick. This kid is a fire off low and hard, “dip and rip” type; getting upfield and bending toward QBs before many tackles can get vertically set to withstand the onslaught.

Pendleton closes the gap on ball-carriers. Pendleton’s athleticism, speed, and length make him a difficult “reach” for any tackle.

If you are a tackle, this kid will work you. Better be an upper-level player to block this cat. Oh yeah, bring your sack-lunch. If you are blocking Wilson Pendleton, you may be in for a long, Saturday afternoon.

As you can tell from the above on-field production, these three kids can flat-out play the game of football. All three of these programs are very fortunate to be inking talent of this caliber particularly this early in recruiting cycle.

It is going to be a crazy ride through the remainder of the recruiting season. We are thrilled to get to come along for the ride.