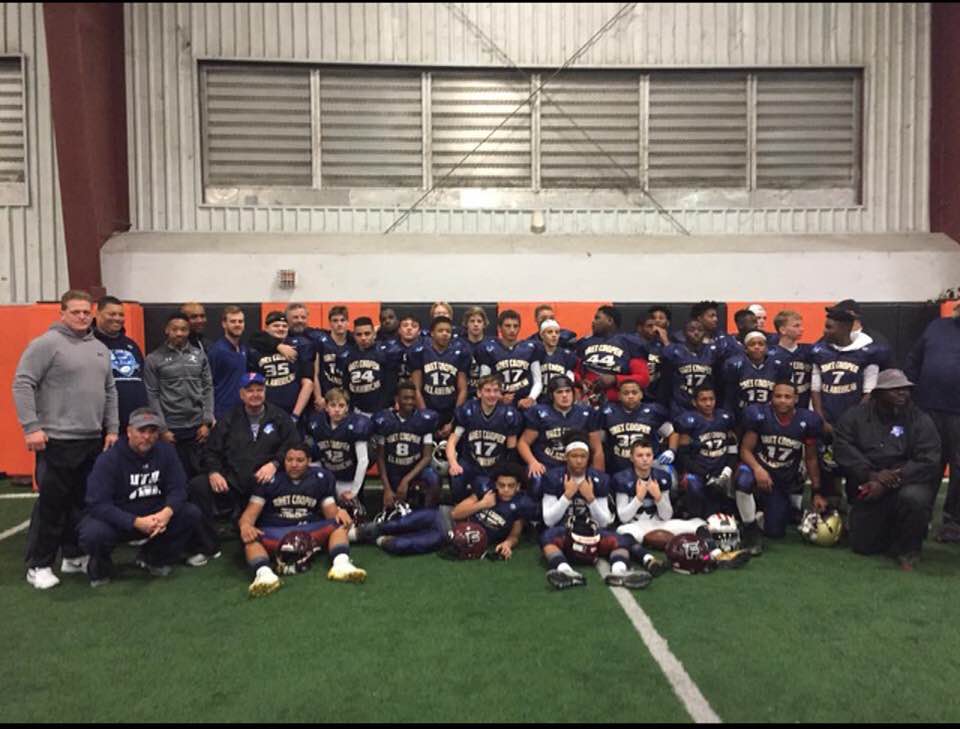 As a lot of you readers already know, I coach football at the middle school level. I have coached offensive line for three years now, coaching in junior pro five years prior to joining a middle school staff. In three years time, I have developed, under my tutelage, along the offensive line, four Middle School All-State football players, two Middle School All-American Football players, a member of the Team Kentucky FBU, 3 Kentucky Future Stars, and a Tennessee Future Star. I also placed two players on the United States National Team Edge in the High Roller’s International Bowl in Las Vegas, Nevada. I have had players featured in articles appearing on both 4.0 Sports Media and Youth1. All of that aside, still, I get routinely reminded by high school football coaches that the high school game…ain’t middle school football. Well, no it ain’t, I suppose, but it is closer to simulating the speed and physicality of the high school game than at any previous time in my memory. At the All-American, and sometimes All-State, levels, the middle school game is as fast and physical as high school football and sometimes faster and more physical, depending on the game. There’s a reason 8th graders transition directly to Varsity football, as 9th graders, many of them starting from day one. It is way more common than at any previous time I can recall.

If you will look to the immediate left, the lineman wearing the blue jersey played for me last year as an 8th grader at HMS. He is a 5’10” 250 pound player. Look at the lineman standing beside him. The player in the grey jersey was who young William Hughes had to block most of the day in this year’s Bret Cooper Junior, 14-under, All-American Football game in Dallas. I don’t know the kid’s exact size but he is considerably taller and thicker than William, and not the least bit fat either. How many 8th grade football players, along the lines of scrimmage, looked like this in your day? This past season, Hughes played both for HMS and HHS’ freshman team. He was the best lineman on both teams. I remember routinely scrimmaging the 9th graders on more than one occasion this past year. Now, in fairness, most of the stud 9th graders were playing either JV or Varsity so the freshman team wasn’t composed of the best 9th graders HHS had at it’s disposal. However, one day in practice, the freshman coach yelled out, during our scrimmage, this ain’t middle school football! Now he was imploring his 9th graders to play like high school players, but the middle schoolers were insulted, and so was I as their coach. After all, we were beating the Hell out of them. I wanted to counter with Yeah, y’all sure aren’t middle school football players. You don’t have a player on your roster who could make my first string! I refrained.

I coach in a plethora of middle school All-American/All-State type games. It is commonly asked of me if I think I could compose a team, entirely of 8th grade All-Stars, who could beat a good high school Varsity football team. Well, just this past December in Dallas, Texas, I had four players at the time trials, just on the East squad, run 4.50, 4.56, 4.59, and 4.63 in the 40 yard dash. Now, HHS was a State Quarter-finalist in Kentucky’s 4A Classification this past season. I guarantee you not a single player on our active Varsity Roster this past season broke 4.6 in the 40, and I believe we only had one player under 4.7. Our highest bench-presser and back-squatter was a freshman for Pete’s sake. Do I think HHS beats the 14-under Bret Cooper Junior All-American East team? No. Would the best 25 8th graders in Kentucky beat HHS given adequate installation and practice time? No doubt. Sorry. The team pictured to the immediate left of this paragraph, I’ll take and play any high school team in Kentucky you want. I know there are a small percentage who would beat us. There are a much larger percentage of high school teams who couldn’t stay on the field with us.

To the credit of some high school coaches, in both Tennessee and Kentucky, the message of the impact a top-flight rising ninth grader can have on his Varsity program is starting to resonate. Entering 9th graders are coming to High School faster and stronger than at any previous time I can remember. It wasn’t but a couple years ago the Webb School in Knoxville started an 8th grader at RB. His name was (and still is) Elijah Howard and he ran a 10.4, laser timed, 100 meter at Tennessee’s Tom Black Track before he ever entered High School. He also won 4 National FBU, 100 meter, sprint championships before enrolling in high school. How did he do as an 8th grader playing varsity football at the Webb School? He gained 1,055 yards on only 99 carries for a per rush average of approximately 10.656 yards every carry. He also caught 15 passes for 442 yards and scored 18 total TDs, as an 8th grader. They weren’t playing a parade of patsies either, playing Alcoa, Oak Ridge, CAK and BGA out of Nashville, among others.

So, here it is, some of you big-time high school football coaches, save your condescension and patronizing for some one else. You can also quit peeing on me and trying to convince me it’s rain. While there used to be a big difference between the two levels, the middle schoolers are working hard and the high schoolers, judging by the strength and speed levels, appear to be resting on their laurels, reading press clippings, and eating a lot of Twinkies. If you keep running your mouth, I may go get me about 25 top-flight, 8th graders and we might just beat the crap out of some of you