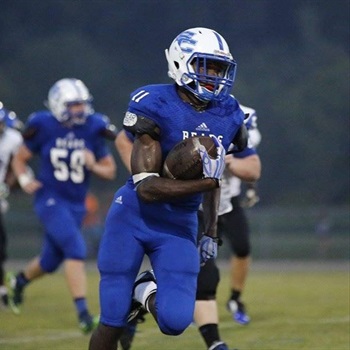 Kadin Smith is a Purdue Boilermaker commitment from Spencer County, Kentucky who is a 3x defending High School Track Champion at the 100, 200, and 400 meters. I saw a 4.63 40 yard dash timeposted for him which I believe to be too slow. Kadin has a registered time of 11.04 in the 100 meters. According to the NFL, an athlete who runs a 4.5 40 will cover 100 meters in 10.95 seconds while an athlete who runs a 4.6 40 covers the same distance in 11.21 seconds. Using the NFL figures, I would estimate Kadin’s actual 40 time to be in the neighborhood of 4.52 or thereabouts.

Kadin is from the Taylorsville, Kentucky area and plays his HS football at Spencer County. As a sophomore, the 6’0″ 189 pounder averaged 14.1 yards per carry while gaining 1,254 yards from scrimmage and scoring 21 touchdowns. Fifteen of those TDs were rushing, three receiving, two fumble returns for TDs and a pick six, meaning Kadin is dangerous however he should come to touch the football. On defense, as a sophomore, Kadin posted 64 tackles, 36 being solo, to go along with his three fumble recoveries and three interceptions. Last year, Kadin averaged 10 yards per carry and gained 1,304 yards from scrimmage. It would appear being the focal point of the opposing defense’s game plan didn’t sizably diminish Smith’s prodigious productivity. Defensively, Kadin tallied 80 total tackles as a junior with 54 being solo tackles with another three picks.

So where does Kadin play when he reaches West Layfayette, Indiana? From looking at his film, Kadin appears to us at Kentucky Prep Gridiron to start out as a free safety (though he plays strong safety at Spencer County) and will probably work as a freshman on special teams as either a punt returner/kick returner, or possibly even both. Kadin possesses the back end height and length which Big 10 teams like to stock in the back 4 to combat the increasingly tall edge targets teams face. As a returner, Kadin has a

a 4.16 pro-shuttle time, which is fantastic spacial quickness. This accounts for his illusiveness when he is in space. It also appears abundantly clear that Kadin is not just a track fast, he’s a football fast too. From his film, Kadin abundantly demonstrated that once he climbs to the 2nd or 3rd level of a defense, he hits the jets becoming nothing but a memory. One thing is for sure, if Kadin is even…he is leavin’!

Kadin is rated by 247Sports.com as the Commonwealth’s 6th most prized prospect in the 2018 class. This is another example of a solid evaluation by a Power 5 conference, FBS school as Kadin is rated as low as a 2* on some sites and a 3* on some others. As for KPG, we don’t give a damn about the stars. All we know is Kadin is headed to the Power 5 baby! This means to us that the professional evaluators who are paid by the University to keep the cupboard well stocked with talent which will compete with the Ohio States and Michigans believe Kadin is BIG TIME. It is highly probable those guys know more about football than some guy writing for Rivals, 247Sports, or even Kentucky Prep Gridiron. Therefore, we will defer to the professionals over the enthusiasts and the provocateurs. After all, if my evaluation is wrong, oh well; if the coach at Purdue misses too many, it’s bye, bye.