One of the things we enjoy most, at KPGFootball, are the articles we both research and write about the origin or history of either the game of football or terms universally used in the sport we cover. From the first game of organized football many of us have ever played, right up until present time, we have been taught on defense to yell Oskie upon intercepting the football.

The purpose of the yell is to alert the other defensive players to immediately start blocking for the defender who has gained possession. When younger, it never occurred to us to inquire of the coach imparting this wisdom as to why we were yelling Oskie any more than inquiring as to why the punt return team yells Peter to alert punt returners, and up-men alike, to get away from a short punt so as to not have it, accidentally, glance off of a player, making the ball live and recoverable.

Perhaps in a future article we will tackle the Peter phenomenon. Today, we will attempt to shed some light on yelling Oskie. 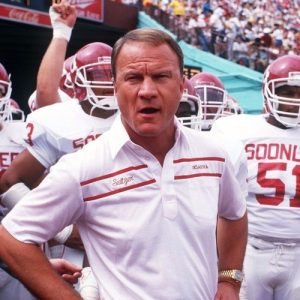 At KPGFootball, we always believed the reason for yelling Oskie was purely percussive in that the word Oskie is easy to both hear and yell at a high volume. It sort of cuts through sound to be heard even in full, noisy stadiums.

There are other percussive words regularly used in football like, hutt or hike. Well, while that may be the unintended consequential happenstance of Oskie, it appears to have little to do with its origin.

Coach Barry Switzer (OU), in the 1970s, according to some on-line research we have done, told a player of his at Oklahoma that Tennessee’s legendary coach, Bob Neyland, had a dog, named Oskie. The story goes Neyland would pitch his dog a ball saying, ball, Oskie, ball, to indicate he wanted Oskie to catch it and return it to him as part of their mutual play.

There is another story floating about that Oskie was Neyland’s bird dog who would catch the birds the General shot, while hunting, right out of the air before the game could even hit the ground. Both of those stories sound grand, but we couldn’t find either corroborated anywhere else.

Regardless, KPGFootball believes it to be true General Neyland had a dog whose name was Oskie. We are uncertain of Oskie’s breed.

In the 1930s, Bob Neyland both devised and had his players at Tennessee recite something before every game (still recited by UT today) called either the Seven Game Maxims or the Seven Maxims of Football. The maxims were (and still are) the following…

As one can see, the term was being used as a term of art in the game of football even then, as there is no indication Neyland’s players failed to understand what was meant by ball, oskie, cover, block, cut and slice, pursue and gang tackle. So whether Neyland was having his players yell Oskie upon intercepting a football as an honorarium to his beloved pet or whether he named his dog after this term of art from the game he coached for a living we can’t tell you. It is somewhat similar to the old chicken and egg origin debate, wouldn’t you agree?

There is one other position as to the true meaning of oskie which floats around the game of football and it is that oskie is an acronym for Our Side Caught It. KPGFootball believes for that to be the case, the acronym should be Osci as opposed to the universally accepted spelling of Oskie.

After all, isn’t an acronym, by definition, an abbreviation formed from the initial letters of other words and pronounced as one word? At KPGFootball, we have never seen the word Oskie spelled Osci. Whether or not an acronym for our side caught it, it does signify to defensive players across the nation that our side, has indeed, caught it!