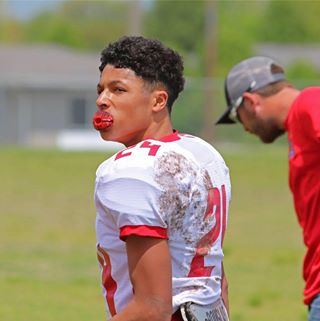 There is a movement afoot around the country called #LetUsPlay. It has spread virtually from “sea to shining sea.” It is a cry to the authorities that be to let the kids play this coming fall in the fall sports. It is most resonate in the football community.

The poster child for this movement should be Isaiah Fitzpatrick from Anderson County. When we last say him play, he was a 5-6, 151-pound, 16-year old kid, with a 4.6 forty and a 190-pound bench press. His 2019 season was unremarkable and we are being generous in that description.

As a running back, he carried it 3-times for 27-yards. As a defender he was equally non-existent (10-tackles).

Enter a new coaching staff. Enter an offseason training regimen at Aspirations Fitness Institute in Louisville, Kentucky. He’s not even the same player.

Isaiah won the Coach’s Award in 2019. He trains with some of the finest players Kentucky can muster in his offseason regimen. He has honed his abilities and sharpened his talents against college-level competition.

Colleges are taking notice as he is already fetching offers. Not a lot of players, with no senior film, and the junior year production of Fitzpatrick are getting scholarship offers to play in college, so that should say something.

No one, and we mean not a single player in Kentucky, needs a senior season as badly as Fitzpatrick. He may be the fastest player in the commonwealth. Pound for pound, his strength, power, and explosion have exploded right off the charts. So has his confidence.

Isaiah is shredded up physically. The pass-happy offense he played for in 2019 has moved to Cadiz, Kentucky. The new coach at the helm will run it first and foremost. Translation…Fitzpatrick, if given a chance in 2020, is about to tear it a new one.

If we were betting men, and we have been known to be, we would suggest you wager the house on Isaiah Fitzpatrick exploding onto the football scene in a big way in 2020. We would also suggest you not count the Bearcats out of the district picture, Boyle County and Lexington Catholic be darned!