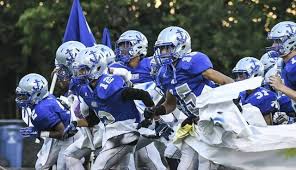 Sam Harp over his head coaching career in Kentucky, which spanned 32 years, won 326 games against only 106 losses on his way to the KHSAA Hall of Fame. That isn’t to say Harp invented winning at Danville High School. There was this guy named Tom Duffy. All he did was win State Titles for the Admirals in 1984 (3A) and 1987 (2A) on his way to 213 coaching wins against only 79 defeats over his 24 year head coaching career. Duffy, certainly no slouch, had a career 4-0 mark in the State Championship Games. Duffy coached at Highlands and Henderson County in addition to Danville High School. Who was the Coach in 1962? Ray Callahan.

As for great players who played at Danville High School, Kentucky Prep Gridiron would specifically mention three of the many who could be named. There’s Sam Burke who played on the 1962 2A State Champion team before having a splendid career playing for Bobby Dodd at Georgia Tech. Among the former Admiral greats, Chester Ford and he probably had the finest college careers. There’s Chris Jones who was a Parade All-American in 1977 and led all freshmen in the SEC in rushing yards, after signing with UK over Barry Switzer’s Sooners, before a knee injury ended his career. If not for that career ending injury, well, who knows? Then, there is Chester Ford who played in 33 games in his career at the University of Tennessee in the mid-90s as a fullback principally charged with clearing the way for running backs as opposed to running the ball himself. KPG apologizes to Donnie Redd, who was an awesome wishbone HB for the Admirals before being moved to QB his senior year, later matriculating to UK, and Jimmy Baughman, who many around Boyle County claim may be the Admirals best all-time.

In the end, the argument as to whom were better then whom doesn’t matter. The name on the front of the jersey, Danville High School has always been a whopping success regardless as to whose name appeared on the back of the jersey. Remember ballers…PLAY THROUGH THE WHISTLE!