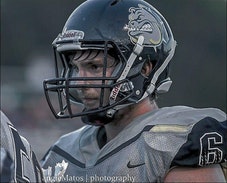 While I am at it, we at Kentucky Prep Gridiron would like to wish all of you a Happy Independence Day. Now on to the business at hand…I really like pancakes. I can’t get to eat them because I am on this never ending, low carbohydrate, diet and pancakes are full of carbs, but I like them. Opponents who play inside techniques along the defensive front against Fairdale Magnet Career Academy in Fairdale, Kentucky must like them too. From the film on Jared Rogers I have seen, they are getting a steady dose of them.

Jared Rogers pancaked 73 opposing players last year for the Bulldogs. He is 6’3″ and weighs 285 pounds but has plenty of frame to hold another 20 pounds easily. He has quick feet and explodes out of his stance and gets immediately downhill. His punch is awesome and he stays connected well, over his heels well (doesn’t lunge) and plays in the defensive, and not offensive, backfield. He was in the defensive second level so much I thought he was a linebacker.  Just kidding.

Jared plays with very good leverage and is strong enough to lock onto the breast plate of the defender, gain separation, and drive him backward like the defender is wearing skates. Jared reports a vertical leap at around 20 inches with a bench press of 305, 20 reps at the high school rep weight of 185, and a back squat of 400 pounds.  These are all pretty average strength numbers for an interior offensive lineman entering his senior year and these numbers might be old and he might be considerably stronger now.

Put another was, as an Offensive Line coach myself, I believe a kid on the offensive front, to be a Varsity starter in High School football, should be able to bench press a minimum of 250 and squat 405. I use that as a measuring stick and the numbers aren’t absolutes but it gives players benchmarks for which to shoot in the offseason strength program.

Weight-lifters are not all football players and Jared Rogers is clearly a football player. Jared attacks the defense, instead of catching the defender and is ranked by Scout.com as the 26th best player in the Commonwealth of Kentucky in the 2018 Class. This is a pretty solid rating for an interior OL guy because they are hard to rate and rating services more highly prize skill position guys. Jared has been offered by some FCS schools and he is a definite take at the FCS level who will monster out after working in a College Strength & Conditioning Program and eating at the training table. KPG, similar to Charles Allen, believes Jared’s future position may be at Center. Regardless, he is in the top 3-5 interior OL guys in the Commonwealth and, yes, Coach Long would like to have about five of him on his team!