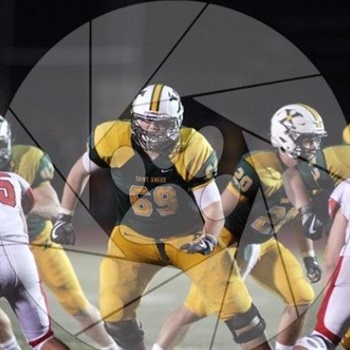 Farris is 6’5″ and weighs in at 300 pounds and has the frame and length to play tackle at the next level. 247Sports.com has evaluated Chase at Guard and list him as the number 24 overall prospect in Kentucky and the 2nd overall guard in the Commonwealth but Chase has the length to play outside and counter the up field edge pass rush at tackle and the speed (5.7 second 40 yard dash) and quickness (5.03 pro-shuttle) to trap, block the second and even third levels, and pull; all of which suits someone playing any of the three interior line positions.

Farris has listed Center among his primary positions on Hudl.com. In today’s college football climate, the present conventional wisdom is he may be too tall for that position. There has been a move toward developing shorter Centers, expanding the middle throwing window, in the advent of dual threat QBs who have neither the height nor release point of their longer, taller, pro-style, drop-back counterparts.

I was impressed with Chase’s film though as he, like Jared Rogers, explodes into the second level with cruel intentions and low pad level devastating would-be tacklers who cross his face. Chase also exhibits a penchant for driving first level defenders into the second level in the run game. He’s to what we refer as a down-hiller. Chase, entering his senior season, counts Austin Peay, Indiana State, Florida Atlantic, EKU and Howard University among his present offers but it doesn’t take tremendous imagination to realize other suitors will fall in love with his athleticism (22 inch vertical), speed, quickness and realize, coupled with his size and frame, Chase has tremendous upside. Schools are not done offering him.

Kentucky Prep Gridiron fully expects Chase to get looks at Tackle at the next level. KPG also believes Chase will continue to gather FCS offers and FBS offers too as the season progresses. Being totally honest, this is a kid who would greatly benefit from a red-shirt year to get his anatomy adequately prepared for the rigors of football at the FCS/FBS level. Provided he puts in the work, KPG visualizes Chase Farris playing football for many more years to come.