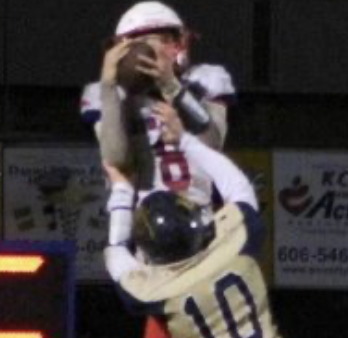 Sometimes you have to own mistakes, this kid should have been a KPGFootball, sophomore All-Stater in 2019.

We have said this many times, but no All-Anything team gets it completely right. We have been quick to examine, and re-examine, ourselves through the years we have been online.

We have made mistakes, and glaring omissions, to every team we have before published. Last year’s sophomore All-State team was no different. Lincoln County’s Clayton Davis should have been on it!

How in the world does a magazine, with the scouting network we have in place, miss a sophomore wide-receiver (WR) with 48-receptions, 12 of which were for touchdowns? How do we miss a WR with 789-receiving yards?

How do we miss a WR who, as a sophomore, was an honorable mention, All-State player selected by a major, Kentucky-wide media outlet and made his All-Area 1st-team? We wish we knew.

How do we miss a defensive back, playing 4A football in Kentucky, who had 66-tackles, 2 of his team’s 4-interceptions, a forced fumble, and a recovered fumble? We wish we knew.

For a sophomore in high school, the above numbers comprise KPGFootball, sophomore All-State caliber play on either side of the football. All of the above was turned in by one sophomore, Clayton Davis from Lincoln County, in Stanford, Kentucky.

Of course, the blame isn’t completely ours. Football is a team sport and the Patriots struggled in 2019.

There are lots of players on teams which finish 3-8 who get left off all-star teams. It isn’t fair but happens and has always happened.

Another thing we would suggest to Davis, assuming he reads this, is he needs to put more information on his Hudl page if he wants to be recruited. For instance, coaches are going to want to see a height, weight, speed numbers (40, shuttle, L-cone, 60m,100m, 200m), especially in light of where he aligns, vertical and broad jump figures, and any lifts (bench, squat, power-clean, dead-lift) he feels particularly state his case to recruiters that he is a “take” at their level of play.

Prospects should put their GPAs and standardized test scores too. Colleges prefer to recruit players they can actually get past the admissions’ committee.

Right now, if you “search” Clayton, you can find he is on the roster and his impressive seasonal output from 2019, but that is all. To the right of this paragraph is a screen-shot of his Hudl page.

We have to do better than this folks. College coaches have too many prospects to evaluate; they aren’t going to dig for it. It needs to be easy for them to find. It kind of needs to hit them over the head, so to speak.

This is all part of learning how to get recruited. Clayton Davis is far from alone at needing instruction on this.

Too many athletes just blindly put faith in the fact the high school coaching staff is doing this for them. There are few high school staffs these days which take the time, or even think it their responsibility, to get their players recruited to a college program.

Parents have to do it. The prospect has to take an active roll in it. There are services out there who can assist.

All he needs is some attention paid to the sites online meant to “spread the word” about his abilities. He could also benefit from the Partriots turning in a much improved record in 2020 than the 3-8 posted in 2019.