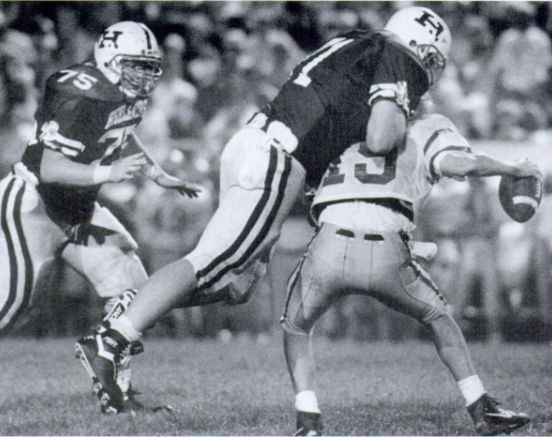 On November 12, 2020, Kentucky’s offensive line coach and former all-conference player, John Schlarman passed on to his reward. He left behind a grieving and inconsolable best friend and former teammate at both Fort Thomas Highlands and later at UK in Rob Reynolds.

Two days ago Reynolds was called home to join Schlarman. Now it is a commonwealth full of football fans, high school and college alike, who are inconsolable.

Rob Reynolds played his high school football for Fort Thomas Highlands on teams which are still fondly remembered around northern Kentucky to number among the greatest the region has ever seen compete. Both Schlarman and Reynolds would be on the ’91 team which would beat Paducah Tilghman’s “Blue Tornado,” 15-6 at Louisville’s Cardinal Stadium at the old fairgrounds.

Sports writer for the Paducah Sun, Chris Evans, poetically and majestically wrote about that game, “The ghosts of December came calling once again as the haunting shadows of Louisville’s Cardinal Stadium took another bite out of Paducah Tilghman’s quest for respect at the highest level.” Evans would continue to chronicle, “With a bewitching wind howling across the Astro-turf, Fort Thomas Highlands (14-1) capitalized on Tornado mistakes to beat Tilghman 15-6 for the Class 3A state championship on a cold Saturday afternoon.”

Yeah, the former greats could really do it, couldn’t they? They were Titans of the industry for a reason. Bravo, Chris Evans!

Back to Schlarman and the now late Rob Reynolds, the pair would help Tom Duffy win his second title in four years at the northern Kentucky school. It would be Coach Duffy’s fourth title, at the time, overall. For the Blue Tornado, it would be the school’s fourth missed opportunity for another state title, to add to the one it had won in ’85, in the six-year span.

The Schlarman and Reynolds tandem would see their team benefit from three fumbles and three interceptions. The boys from northern Kentucky would also seize on an opportunity, at least partly brought about by freezing temperatures and howling winds, which seemed to clamp down on Tilghman’s hopes, or so Chris Evans of the Paducah Sun seemed to suggest.

John Schlarman would go on to be an all-conference player at UK and become its OL coach. His best friend, Rob Reynolds would transfer to Murray State and play along the Racer offensive line.

Reynolds was a two-year starter for Houston Nutt at MSU. Reynolds was a vital cog on teams which won back-to-back, OVC Championships.

Reynolds would say of Murray, “I loved Murray and it is still my favorite part of Kentucky. There is no other place in the world like western Kentucky.”

Reynolds would pursue his masters in education at Xavier University in secondary education and become a social studies teacher. He would take summer classes the year of the World Trade Center attack studying Middle Eastern history and political crisis which covered the Taliban, in particular at an eerily auspicious time.

When the World Trade Center was attacked in New York City, Reynolds would lose a friend and competitor. He would feel the loss deeply.

“He went to my rival high school, and I played football against him. He was working in the tower when it was attacked,” Reynolds would say at the time.

We caught up with a valued member of the Highlands football staff back in Reynold’s and Schlarman’s day. Coach Jon Collins told KPGFootball about Reynolds, “Rob had the goods, but he was a head dropper. No confidence. He went on from those beginnings to become a fine, fine football player and an even better man.”

“The kids were calling him Lard Bucket,” Collins told us. “Kids can be cruel and this didn’t help his confidence at all.”

“I started working with him extensively, offseason. Really put him through the ringer getting him ready to excel in summer camp. The season was upon us and I told him to call out Schlarman, challenge him. It would rival Paul Bunyan versus Babe the Big Blue Ox. They each won a rep and the third rep was a draw.”

“As the two players fell to the ground, I jumped on Reynolds and pulled him up hollering, Big’n! Big’n! Thankfully Big’n caught on and became his new nickname.”

“Reynolds much preferred Big’n to Lard Bucket. I don’t know that I ever made a kid happier in my entire coaching career than I managed on that particular day.”

Reynolds coached high school football himself, around the commonwealth, for years. Later in life, Reynolds enjoyed another career in construction quality assurance. In 2007, Reynolds moved to Las Vegas, Nevada with an opportunity in his new chosen field.

Reynolds, in an interview he gave years before his passing, said, “I was there (Nevada) when my company was recruiting to work on the World Trade Center.” Reynolds answered that call and would describe the experience as “remarkable.”

Reynolds said he couldn’t “put into words” what it meant to him to be involved in that project. Nor could he avoid getting choked up in describing being at the site of the World Trade Center when Bin laden was killed. Reynolds would describe the site as being both “packed with people and intense.”

This guy literally did it all. He was a shining example of diligence, work ethic, toughness, and grit. As was once written by one of the three canonical poets of Latin literature, Ovid, in his work Metamorphoses…

“…And now [Rob Reynolds has] finished the work, which neither the wrath of Jove, nor fire, nor the sword, nor devouring age shall be able to destroy.”