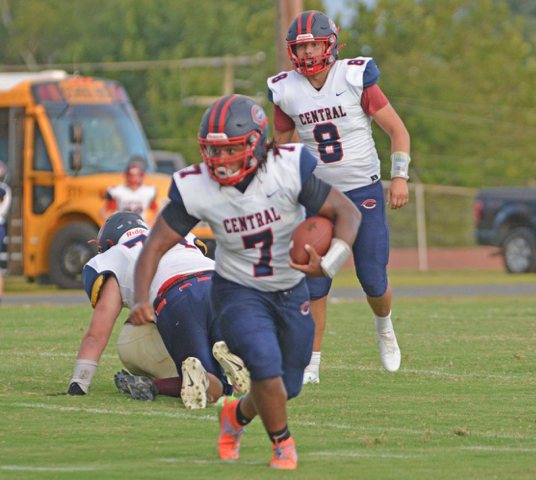 Well, as the Delta Strain of the coronavirus was having its way with us around the commonwealth, we opened a football season. Now Delta took her toll on us, as many teams scrambled to find opening opponents and some teams ended up playing teams for which they had literally no time to prepare, but hey; that has become high school football in the pandemic era.

There were some outstanding, and even surprising, results from last night. We absolutely won’t get them all. However, here are some which caught our collective eyes from last evening.

What happened to the two-QB plan? Storm rolls over Webster 47-9.

Fans of Hopkins County Central came into the year trying to convince us at KPGFootball that Jaden Brasher may be a better QB than Adrian Stringer. Brasher kept outperforming Stringer (they insisted) in preseason scrimmages.

We just want to tell all the Storm fans we aren’t as gullible around our offices as some of you obviously believe. Last night, in the opener, the Storm mainly rode the horse the program has come to trust to run the offense.

The result? Hopkins County Central is 1-0.

Stringer came through, as the 6-4, 230-pounder has proven prone to do. Central scored early and often, earning it first win of the year.

The Storm blew over Webster County, 47-9, on the road avenging a loss it suffered to Webster in 2019, 20-14, in Dixon, KY. Stringer took every meaningful snap.

In so doing, we have had reported to us Stringer personally accounted for over 300 all-purpose yards. The reclassified ’22 QB connected on 10 of his 18 passing attempts for 212-yards and two TDs and gaining 92-yards rushing on only nine-carries, carrying one of the nine attempts across the goal line.

Jordan Jackson went over a hundred in rushing and threw in two of his own scores. Unofficially, Jackson gained 105-yards on 11-carries.

The Storm saw the debut of freshman Logan Rodgers, a name with whom KYMSFA fans are certainly familiar. He logged three carries and gained 22-yards, indicating going forward he needs more opportunities.

You know what they say. There are no small parts, just small actors.

Kudos to Rodgers for making the most of his limited opportunities. This kid’s role will expand weekly as the season unfolds.

Very solid opening win for the Storm. They look to be a factor in the first-District, Class 4A, in ’21.

We figure Omarion Riddick had to roll in this one…Todd over Trigg 56-28;

This match-up pitted two relatively new coaches in their respective positions. Josh Robins did a very good job in his first year, which was shortened by the same pandemic threatening this season. Coach Robbins may really still be in his first season, technically, until mid-way through ’21.

Chris Ezell, for Trigg County, was coaching his very first game as a head man last night. His being in a rookie season is without question.

Now the smart money was being wagered on Trigg County as it has the better tradition and plays in the larger classification. The last time we could find these two teams squaring off was on September 9, 2016. Trigg County beat the Rebels that night 47-14 in Cadiz, Kentucky.

Of course, 2016 was a long time ago. We had never heard of coronavirus then.

Anyway, the “smart money” telling fans to predict a Trigg County Wildcat victory in last night’s opener didn’t end up looking too smart. Man, this seems to happen more and more as the years roll along and as parity hits the high school game.

Not many people would have bet on Todd County last night, even with the game in Elkton. Here’s a little lesson though, big RBs can flip scripts.

Hard to bet against any team which has an Omarion Riddick in its backfield. Riddick may be the best RB in the western end of Kentucky of whom many of you haven’t heard.

There are no stats from last night posted yet. We also couldn’t find an account of this game posted online from any of the local outlets which regularly cover either of the two teams.

That being said, we know of what Riddick is capable and we know how much Todd County prefers getting downhill in the ground game and pushing people around the football field. We would be willing to wager Riddick came up big last night. We know the Rebels did!

Big P, Little P…Don’t know which is which but Pikeville rolled 43-21;

We love Friday nights. We send out agents across Kentucky to watch games for us and around the time games are ending our phones are swimming in texted scores and we are getting phone calls about football action with our dozens of agents.

So we get a call from one of our Lexington guys. First question he asked of us, Hey, who won Big P, Little P?

We didn’t know to which two teams he was referring. When he elaborated, we found out he wanted the winner of Pikeville/Paintsville. We don’t know which of these two would be Little P. We don’t care, that isn’t how we know them.

The game pitted the last two successive, Class 1A titleholders. Pikeville has won multiple championships at that level of play and last won it in ’19. Paintsville, though a consistent threat to win the 1A crown, won it for the first time in ’20.

By the way, Pikeville’s opponent in ’19? It was Paintsville.

Without venturing a guess as to which P is big or little, last night the Big P looked like it was Pikeville. So, we would say Big P put it all over Little P, at least on opening night. We would also say Big P looks to us, in ’21, to be back in a big, big way.

Anyway, that is our report from around the horn last night. We begin morphing our coverage from out of season to in-season so hold on as that process sorts itself out. We will have more coverage this week from opening night as statistics get posted and we get a firmer look at exactly who did what.