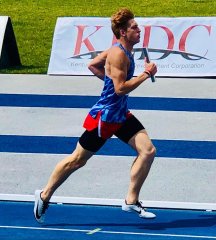 Some kids make predictions just way too easy. Kids with the frames and athleticism of Rylan George for instance.

George was a freshman on a pretty good football team in the pandemic shortened ’20 season. Union County smoked Paducah Tilghman twice a season ago, once 49-7 and later on 35-21 in the district championship round of the KHSAA playoffs.

The Braves dropped the Regional Championship to E-Town. Of course, E-Town was loaded a year ago. The Panthers played for it all in the 3A classification.

Predicting Rylan George is headed to stardom is such an easy prediction we can’t believe we’re the first to report it. To not recognize the attributes of this particular class of ’24 prospect you just have to have your head buried in the sand somewhere.

First of all, the kid is 6-3 on a bad day. He looks closer to 6-4 to us; but whatever, he’s only entering his sophomore year so he has time to finish out his height and length.

Secondly, he is a muscled up 190-pounder who we have seen projected as high as 205-pounds currently. This kid could easily grow into an OLB. He muscles up effortlessly. He’s “got a ton of lines in him,” as is commonly said in reference to kids with similar physiques.

George is very athletic. He not only found the field in 5-games of varsity action a season ago, being credited with 4-tackles, but he is a member of the varsity Track & Field team and one of the finer 400-meter guys in his region and on Union County’s team.

George clocked a 57.13-second, 400-meters this past spring. That is moving. Anything under 60-seconds, in the 400-meters, is considered a really good time.

Clocking a 57.13-second, 400-meters means George averaged approximately 15.7 miles per hour over that distance. That is cooking. It also demonstrates the type physical condition he maintains.

So Rylan George is going to absolutely kill it this coming season. We imagine he will be a two-way player and he will be quite a star offensively at WR and defensively along the defensive 3rd-level as a rangy, heat-seeking (probably future OLB) safety.