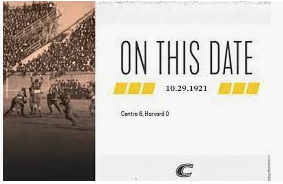 We want to advise, first of all, anyone who thinks this is the only time subject-matter of this nature has ever before been covered by us, doesn’t read this publication often enough. We take seriously our obligation to be custodians of the game of football and its rich history. We have written several articles of like-kind since coming online.

This is the 100th-year celebration of the most remarkable upset in the history of college football to be achieved by any team which has ever fielded a college roster in the commonwealth’s history. Today, we decided to take a look back at this monumental game and some of the players who made it possible.

To say the Harvard Crimson were a powerhouse program in the college football world at the time would be putting it mildly. They were the Alabama Crimson Tide of its day.

Coming into the Centre game, Harvard was undefeated (5-0-1 with a 21-21 tie with Penn. State). The Crimson had yielded only 28-points all year in their first six games. In addition to the 21-points surrendered to Penn. State, Harvard had beaten the University of Georgia 10-7.

By the way, not sure how Centre was supposed to be such decided underdogs in the contest other than college football played in the East was considered decidedly superior to the brand of football played in the South. The Colonels entered its game with Harvard coming off wins over Clemson, VPI, St. Xavier, and Transylvania. The boys from “Transy” Centre had routed 98-0.

Centre, un-like Harvard which had surrendered 28-points over its six previous games, had yet to yield a point in its four prior contests. The game between the two was played at New York’s famed Polo Grounds, the home to the NFL’s New York Giants (and to the New York Jets for the first three years of its existence).

The site of the matchup was indicative of its magnitude and importance. The game was a sell out and was played before an estimated crowd of over 43,000 fans.

Coach Moran had Happy Chandler, who was at Harvard Law School, scout the Harvard team and take copious notes, which Chandler was more than “Happy” to do! Among a lifetime of rich accomplishments, Chandler would accomplish many great things in his time.

Chandler would go on to serve as Commissioner of Major League baseball. Chandler would also gain induction into Baseball’s Hall of Fame, would be elected a two-term Governor of Kentucky, and would serve the commonwealth as one of its two US Senators.

Getting back to the game, after a scoreless half, early in the third quarter Red Roberts reportedly told Bo McMillin, “It’s time to score, ride my hump.” McMillin would do just that and run for a 32-yard touchdown, dodging three of Harvard’s secondary in the process. Harvard coach, Bob Fisher, said after the game, “In Bo McMillin, Centre has a man who is probably the hardest in the country to stop.”

The joyous aftermath for Centre, not too great for Harvard…

All around Danville students painted the seemingly “impossible formula” of C6H0. The campus post office has the last vestige of this on its side wall.

Tulane coach, Clark Shaughnessy, later wrote about Centre’s improbably win that it “first awoke the nation to the possibilities of Southern football.” That is quite a mouthful.

Centre College followed up its game with Harvard with wins over Kentucky, Auburn, Washington & Lee, Tulane, and a Christmas Classic win over the University of Arizona before falling to Texas A&M in the Dixie Classic, 22-14. Centre would finish the season 10-1.

The Crimson lost the very next week to Princeton, perhaps with shaken confidence. Harvard would rebound to defeat both Brown and Yale. Harvard would finish a season it entered with such high hopes a respectable, but certainly not exceptional by Harvard standards, 7-2-1.

The game’s lasting legacy on all of college football…

In 1950, the Associated Press named C6H0 the greatest sports upset of the first half of the 20th century. In 2005, The New York Times called Centre’s upset “arguably the upset of the century in college football.”

In 2006, ESPN named it the third-biggest upset in the 138-year history of college football. On the return celebration in Danville on Monday, Governor Edwin P. Morrow remarked “I’d rather be Bo McMillin this moment than the Governor of Kentucky.”