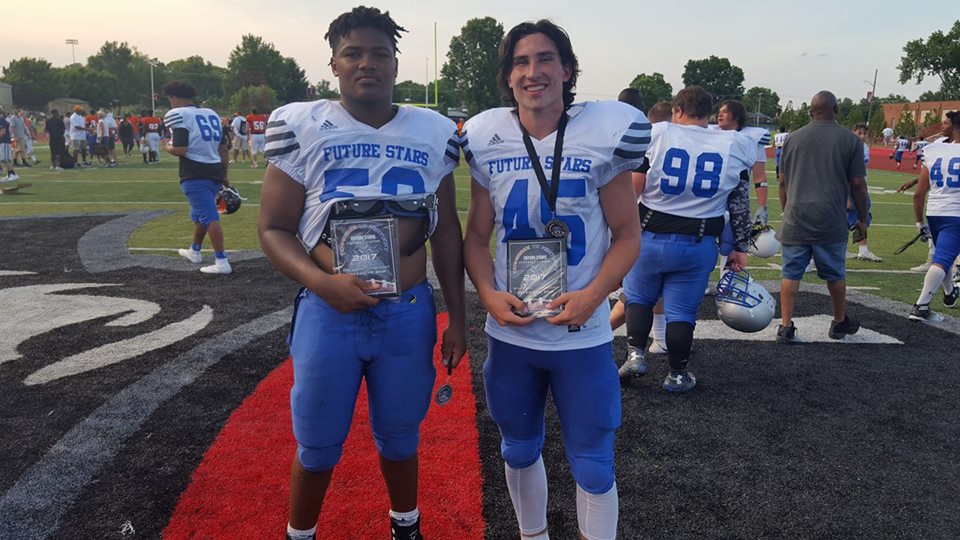 This is our final installment (Part 5) of our series on Plug-In Players. I know we have been over this before but the criteria to be considered a true Plug In Player is a freshman player (2021) who is either starting, week one, or almost certain to start by year’s end, meaning he is sure to earn a Varsity Letter.  The players featured today are four players who sources speaking to Kentucky Prep Gridiron have confirmed will definitely start Varsity by year’s end and three of them are starting right now heading into the first game. Now that you have been sufficiently primed, let’s get to the meat…

The first two players are pictured together and won, respectively, the Defensive and Offensive MVPs of the most recent Tennessee-Kentucky Future Stars Classic. The player pictured to the left is Justice Thompson and Thompson is a 6’0″ 225 pound grown man who is starting right now at Louisville Ballard High School for Defensive Coordinator LaKunta Maximus Farmer for whom he also starred when Coach Farmer was the HC of the Kentucky Future Stars Team this summer in Clarksville, Tennessee. Thompson’s play netted for him the Defensive MVP of the game for the victorious Kentucky team. All I can say about Thompson is we didn’t have freshmen like him back in the day. Justice is listed at 6’0″ 225 in the Ballard Rosters but I would like to know whether he was really measured and weighed or did they just use last year’s measurements because he looks both taller and thicker than that to me. He appeared to me, this summer, to be every bit of 6’1″ 235-40 in Clarksville and he runs like a deer. I don’t know whether you remember, but in an earlier article I detailed Justice ran a 40 at the Louisville combine for the Kentucky Future Stars team in the high 4.9s. He’s been in Ballard’s strength & conditioning program since then so I imagine he is already faster. Thompson is all football player and has the physique, speed, thickness and aggression that will make Ballard’s opponents look for somewhere else to run other than at him, freshman or not.

Austin Gough played offense this summer for Team Kentucky Future Stars and he was the Offensive MVP as he just plowed over Tennessee defenders on his way to the winning TD. Austin, as we predicted in earlier articles, has found a home at OLB for Owensboro’s Varsity Defense and during the scrimmage with both HHS and McCracken, took every snap at first team linebacker. Austin has clearly grown up and out, benefiting richly from the Owensboro strength & conditioning program, as Austin is easily 6’1″ and weighs every bit of 215. This summer he was in the neighborhood of 200 pounds so he has added 15 pounds of good weight since then. Austin runs the 40 yard dash between 4.7 and 4.8, hand timed, so his speed for a senior OLB, much less a freshman in Western Kentucky, would still be safely above the norm. For a freshman 215 pound linebacker, Austin’s speed, power, strength, explosion, agility, athleticism, and quickness are Beowulfian. Something you have difficulty measuring, though, is Football IQ, and very few freshmen have any at all but that is something Austin has in abundance. Austin, as I watched him this past Friday night, didn’t just make plays, he took the appropriate drops when the situation presented and his pursuit to the football was exactly what you would want from your OLB. Austin is a freshman who will be getting college attention very early in his career and should be getting looks and invites right now. He’s only going to get better as he already looked to me, the other night, like the best linebacker in the Devils’ rotation. If you had asked an onlooker to guess which defender in the Owensboro scheme was the freshman, no one would have pointed at Austin (No. 26). Now, Owensboro High School is the 7th winningest program in Kentucky High School football history and is preseason ranked No. 3 in Kentucky’s second highest classification (5A) in at least one of the preseason polls I have viewed. That means Owensboro isn’t starting Austin because its roster is devoid of talent, they are starting him because their linebacking unit is devoid of talent like Austin. There’s a big difference there.

William Long is a freshman Right Guard who just doesn’t look like a freshman either. He is starting upfront offensively for HHS and he, like Austin, took every snap for the first team in both the Owensboro scrimmage and against McCraken County. McCracken County plays in Kentucky’s largest classification in football (6A) and is coming back from off a 7-4 season and projected by many publications as the favorite to wins its District. Owensboro, as above mentioned, is preseason ranked No. 3 in the 5A Classification. William is 5’10” and weighs 250 pounds with very little flab on him as he is, like Justice and Austin, physically, a grown man. William, admirably, committed himself to the strength & conditioning program, immediately upon leaving the HMS team, and his work in the weight room has paid impressive dividends. William Long has the strength numbers of a much older player. What is even more impressive about William (No. 50) is he is a way better athlete than one would expect from a 250 pound freshman interior offensive lineman. William runs very well, plays with a low pad level, has a very effective punch and is well advanced for his tender years in the area of both hand placement and replacement. As for the HHS Tigers, they are coming off consecutive 10-2 seasons and have been preseason ranked as high as No. 3 in the 4A Classification in Kentucky and no lower than 7th, meaning William’s presence on the starting offensive line is not because the team is poor and has no one else from whom to choose. William is young and is playing in a blocking scheme that is more complex than in what he played in middle school but, once he learns the system well enough to play without having to think, he should really round into a fine RG for a team many believe will make considerable noise in this upcoming season. What is really scary is the bevy of tremendous underclassmen dotting the roster and lineup at HHS, coupled with its really talented Middle School program, will make it a nightmare to schedule in years to come.

The final freshman we will feature in this series is Bryce Yates.  Bryce made every All-American, FBU State and Future Star team one could make in Middle School and performed well every time. Bryce is at one of the best Kentucky Football programs historically at duPont Manual (and, no, the lower case d wasn’t a typo). Bryce is a 5’9″ corner who runs a 40 in the high fours and shuttles in the low fours so his athleticism, speed, and quickness are well above what one would expect from a freshman at the risk of being redundant, as the same can be said about every player we have featured in this series. Bryce has polished coverage skills and always seems to be in position to make a play with fluid hips and excellent reads. Bryce isn’t starting yet, but the amount of Varsity snaps he has been getting, together with how he has played during those snaps, indicate to any and everyone his earning a Varsity Letter are a surety and he won’t be 2nd team for long.

We at Kentucky Prep Gridiron are, in no way, intimating these are the only starters as freshmen in the Commonwealth of Kentucky. We reached out to players like Cameron Willis, Hunter Scott, and others who left our inquiries unanswered but players whom we are reasonably sure will start this year as freshmen, even if they aren’t presently. We readily acknowledge there are many others. We couldn’t possibly either feature or know of them all. We have undertaken this series to accentuate just how significant Middle School Football programs have become to the sustainability of a winning High School Football program and to get across the point to MS footballers to work on the craft and take their development seriously. If you are a MS football player reading this series, you’re next…You would be wise to prepare yourself accordingly.

This is Fletcher Long reporting for Kentucky Prep Gridiron reminding you to PLAY THROUGH THE WHISTLE and please support your Middle School Football programs!