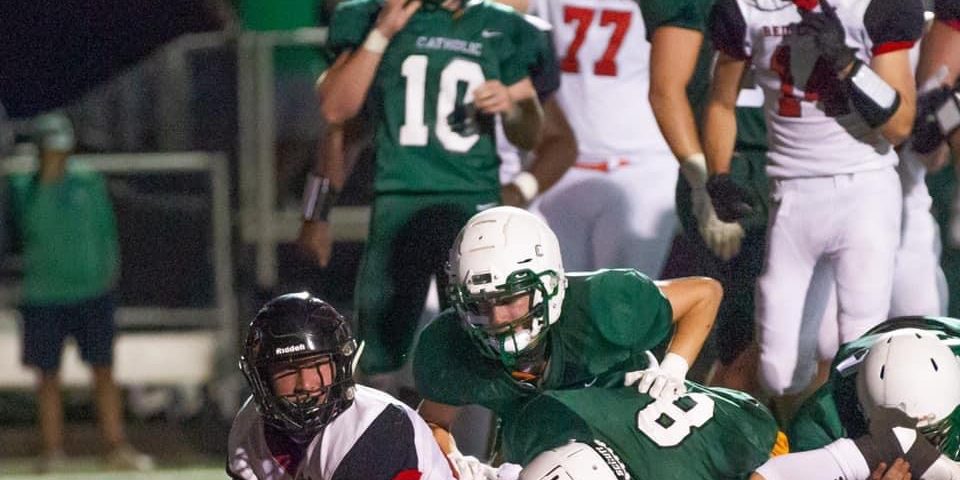 Only two of our previous winners, Darian Dearinger and Isaac Dixon, were in action this past Friday night. William Long and Adrian Stringer were both in “off weeks” with Stringer’s resulting from Covid-19 and Long’s scheduled. As of press time, neither Dearinger’s or Dixon’s stats from Friday night were posted. Dixon’s Belfry team lost a heart breaker to the 2nd-highest ranked team in the 6A classification, North Hardin, 21-20, on “Pond Creek.” Dearinger’s Anderson County team is still winless on the year, dropping Friday night’s game to Bourbon County, 41-21. Friday night was Bourbon’s first win in 2020.

Austin Gough has shown KPGFootball for years that he has a versatile skill-set capable of contributing to team victories in various ways. Often, Gough has shown the ability to do this on multiple sides of the football.

Friday night was a game where Owensboro (Senior) High School was going to have to travel, cross-town, and play an Owensboro Catholic football team Senior’s head coach, Jay Fallin, had never before beaten in Steele Stadium in spite of the fact the Red Devils are in the 5A classification and the Aces from Catholic are 2A. Matters like “classification” and “enrollment” mean very little in Kentucky high school football and there are countless examples of this every week.

Austin Gough, a two time All-State football player with multiple college, D-1 football offers, contributed to the Red Devils win, at Catholic, in every conceivable way a player can contribute to his team. Gough had 8-tackles, recovered a fumble, deflected a key pass on a key down, and scored a rushing TD at RB which was, like the pass deflection, at a key moment of the ball game with the outcome very much in question. If you will look at the film of the play above included, you will see Gough ran over about four opposing defenders on his way to pay dirt and what would be important points.

This was coach Fallin’s first ever win over Catholic, at Catholic, since Fallin has been at Owensboro (Senior). The “Red Devils” escaped Steele Stadium 28-14.

Darius Neal from Frederick Douglass led his team to an impressive victory in a game billed, going in, as “The Battle for Lexington.” Neal, a 2021 RB prospect who is also being recruited at corner, would see his largest contribution, this week, occur on offense. Neal (pictured to the right) carried the football 17 times against LCA for 158-yards and 2 TDs. Dane Key grabbed 5-balls, two of which were for TDs, and Dekel Crowdus had 2TDs receiving himself. Douglass beat LCA 40-8.

Dillon Preston had a huge game for Johnson Central as they beat Perry County Central 75-24. Preston carried the football 6-times for 216-yards and 5-TDs. Wonder how Preston didn’t score a TD on his sixth carry? Oh well, maybe he tripped. Chase Price was clutch on defense with 8-stops, 1 TFL and 1 QB-sack.

We first experience Clay Games when he led his middle school (TK Stone) to the KYMSFA State Division 2 Championship in 2016. We have been waiting for that team, which enrolled in Elizabethtown High School, to “come of age.” Well, it would appear we shall have to wait no longer. Clay Games was brilliant against Meade County who E-Town bested, 36-6, in Brandenburg, KY this past weekend. Games completed 18 of 28 passes for 221-yards and 4-TDs. Camden Williams, his favorite target in the TK Stone days appears to still be the target of choice even now. Williams caught 8-passes for 96 yards and a score against Meade. Funny how time flies and yet nothing seems to have changed. Look out for this squad going forward 3A!

Kaiya Sheron had a big night as Somerset defeated Danville 42-3 on Friday night. The dual-threat, Kentucky lean (we hope and hear) completed 11 of 19 through the air for 216-yards and a TD together with 8-rushes for 65-yards on the ground. Kade Grundy caught 4-passes for 127-yards and a TD.

West Carter’s, Leetavious Cline, appears to be “closing in” on some Jerky products. This is now several weeks in a row he has produced a jerky-worthy performance. The diminutive running back was back at it again as West Carter remained unbeaten, at 5-0, with another lopsided victory. This time, the victim of the West Carter assault was Prestonsburg, whom the Comets defeated 58-7 this past weekend. Cline had 7 carries for 140-yards and 2 scores. Orry Perry completed 6 of 8 of his passes and half of his completions were for TDs, as he had 3 on the evening.

These were just a sampling of the fine performances we saw this past weekend from around the commonwealth of Kentucky in high school football. Join us again next week as we will have more of the same.