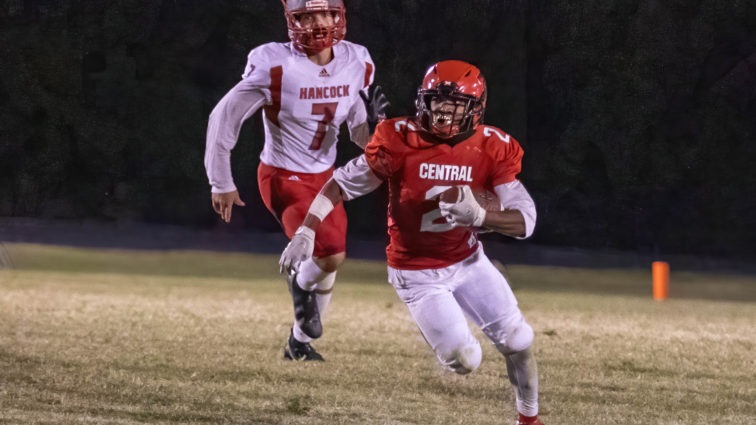 One of my favorite children’s books is The Little Engine That Can. It was written by Arnold Monk who wrote it under the pen name Watty Piper. Monk was an owner of the publishing company which released the book which has become a staple of the children’s book industry.

In the story, a little blue engine, which happens to be female, had never been over the mountain but knew she had the ability to accomplish the task. She kept scaling this obstacle chanting, “I think I can, I think I can” until she did. The moral is, believe in yourself as the first step toward accomplishing great things in your community, school, work, and beyond. It’s a fine lesson.

I bet Omarion Riddick’s dad read this book to Omarion growing up. I can hear him chanting, “I know I can” as he is rocketing down the sideline toward the end zone on Friday nights.

With good reason. He can; boy howdy how he can!

Riddick is a 5-6, 160-pound “little engine that does” who bench presses 225-pounds and squats 250-pounds in spite of his diminutive stature. Guess what else this little engine does? Yessir, he absolutely shreds opposing defenses.

For evidence of this, look no further than this past weekend. First of all, Todd County beat the bejeezus hasenpfeffer out of Trigg County, 56-28, in Elkton, Kentucky. Raise your hand if you saw that coming?

Okay, everyone in the Rebel locker room lower your hands. We know you saw it coming. You’re supposed to believe.

Now, who outside the Rebel locker room saw it coming? We didn’t either.

What we did see coming was Riddick. Riddick transferred over from Class 5A Christian County High School and was slated to challenge for the starting RB position there as he was departing. Getting a player of his ilk to Elkton was a feat in and of itself. His presence on the Rebel roster has paid handsome dividends.

Friday night, Riddick carried the football ten-times for 157-yards and three scores. On the night, Riddick’s team gained 275-yards rushing in 23-carries with five of those being for TDs. Defensively, Riddick, who doubles as a safety, had nine-stops.

Riddick was far from alone in his Herculean efforts. Nate Reding (’23) had four-receptions for 136-yards and two-TDs while QB Gavyn Nolan (’23) was nine for 15 through the air for 199-yards passing with three-TDs.

Overall it was an efficient performance. It was as dominating as it was efficient.

So what is next for the 1-0 Rebels? Well, its next three games are against Fort Campbell, Webster County, and Hopkins County Central. Out of those three, only Central can argue it is a better football team than the one Todd County easily handled at home.

Todd County still has district heavyweights McLean County, Hancock County, and Owensboro Catholic with which to contend. However, having a stud running back in the backfield can act as tonic for much of what ails any football team. This is just as true whether that engine in the backfield is a little or big one.