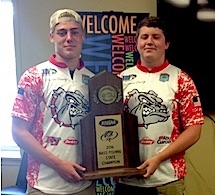 The word, eclectic, is an adjective and is defined, at least online, as deriving ideas, style, or taste from a broad and diverse range of sources. It may just be the perfect adjective for a QB/OLB from Louisa, Kentucky who, in addition to being a football star for the Bulldogs of Lawrence County High School, also won a state championship in Bass fishing. Now, I am not saying there aren’t some bad muthers out there Bass fishing; but, really, how many Bass fishermen are 6-3 inches tall and weigh 225 pounds? How many Bass fisherman break off 40 yards in 4.7 seconds? How many Bass fishermen run the pro-agility shuttle (5-10-5) in 4.5 seconds, or bench presses 265 pounds, or squats 450 pounds, or, for that matter, power cleans 275? I would expect that number to be minuscule. Matter of fact, there aren’t too many QBs in the Commonwealth of Kentucky’s 2019 prospect class whom do the above listed things while standing 6-3 inches tall and weighing 225 pounds. Then again, the word around Louisa, Kentucky is there isn’t anything the least bit ordinary about Noah West.

At the Quarterback position, West is somewhat of an anomaly. Conventionally, on the end of Kentucky where KPGFootball is headquartered, we think QBs throw the football to WRs and, sometimes, running-backs and tight-ends. Sure, our QBs have to be able and willing to pull it down and keep a defense honest. You know, slow down the pass rush screaming off the end, but, overall, if the player runs that well, our end of Kentucky aligns him in the backfield to carry the football and not under the center. Coach Alan Short has a different opinion it would appear. West started all 11 games under center for the Bulldogs completing 9 passes all season for 194 yards and two TDs. West threw two interceptions last year to offset his aerial TDs. However, Noah West tucked the football and gained 1,662 yards from scrimmage in 233 carries for an average of 7.133 yards per rushing attempt. West carried the football across the goal line for a TD, in 2017, on 23 separate occasions. Last year, in only 11 games of opportunity, seven people, in the entire Commonwealth of Kentucky’s 3A classification, gained more yards from scrimmage than Noah West and none of the others were QBs.

Now Lawrence County High School didn’t turn in its defensive statistics to the KHSAA website in 2017. West is listed defensively, in addition to playing QB, as an OLB. At KPGFootball we have no idea if Noah played defensively for the Bulldogs in 2017 nor how well or poorly he did. We do know this; if West were to play linebacker in college, after having prepped at QB, he wouldn’t be the first. Who here has heard of NFL Hall of Famer, Jack Lambert? Though we can’t find anything online to definitively substantiate this, it has long been rumored that Jack Lambert, who graduated from Crestwood High School in Mantua, Ohio in 1970 and wore “00” on his high school jersey, played QB in high school before moving to linebacker at Kent State. Haven’t heard of any schools being involved with West, who is a 2019 prospect, but it is hard to imagine with his size, athleticism, power, strength, and explosiveness that there isn’t a next level, football program somewhere missing one Hell of an opportunity here. After all, he isn’t built like any fisherman. However, much like his line at the end of his fishing rod at a Bass Fishing Championship, this is one Bulldog who’s All-In Lawrence County!