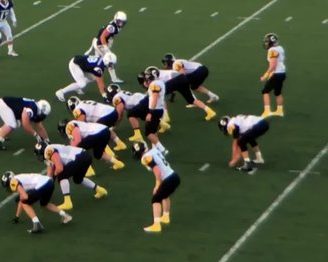 Well, just in case you are wondering how a football team can pound the ground for 4,968 yards and score 645 points in its 15 football games, I believe the picture to the left of this paragraph may be about all the explanation a fella could possibly need. From left to right the players pictured are Chase Owens (2018), Eddie Patrick (2019), Byron Pierce (2019), Noah Blakenship (2019), and, of course, Ethan Bingham (2018). One reason I have included the picture of these meat moving machines depicted with the team’s 2016 State, 4A, Football Championship trophy is to show you the kind of men, populating the offensive fronts at schools like Johnson Central. Eddie Patrick, the topic of this feature, is 6-3 and weighs 280 pounds. Wow! Why is this important to the football fans who need the game explained to them? Well, if Johnson Central has a lead with around 7 minutes to go in the football game, there is a very good chance your team won’t see another possession. Incidentally, Ethan Bingham, who never really camped in his high school career, attended one camp as a senior, somewhere in Georgia, and got swooped up by the Thundering Herd out of Marshall University for the why should we recruit the mountains crowd!

Eddie Patrick is a 2019 kid who knows the meaning of getting down hill quickly in the run game. He is a hard-charger with FBS/FCS height and length. Patrick burst onto the scene as a sophomore by making the AP All-State football 2nd team and the All-Area team after the 2016 season. Looking over the teams recruiting Eddie, teams from Yale to Tennessee Martin, it would appear his core GPA and test scores must be pretty good. Now the knock on Mountain linemen is they aren’t very proficient in pass protection. Let’s face it, a lot of the mountain teams don’t even approach the comparatively paltry passing production Johnson Central had a year ago (1,297 yards over 15 games or 86.47 yards a night). Looking over the offensive formation to the left of this paragraph, it is pretty clear JCHS isn’t exactly airing it out nightly.

This perceived deficiency doesn’t keep them from being highly coveted on the recruiting trail as kids like Ethan Woolford and Dagen Rash from Belfry High School continue to be doggedly pursued as does Eddie Patrick.  Colleges have coaches too, good ones, and kids can learn to kick and drag under their watchful tutelage. It takes reps and having a protégé who is a well-balanced athlete with good feet and a substantially powerful post leg to plant. Marshall thought enough of the Mountains to sign five linemen who hailed therefrom in its 2018 signing class.

We are here to tell you Eddie Patrick is a star offensive guard with the ability to probably play tackle, most likely on the right side, in college. As a guard, there aren’t too many around Kentucky in the Class of 2019 any better, quicker, stronger, or more respected. Now, Eddie has been out on the camp/combine circuit as the picture to the immediate left certainly indicates. We would love at KPGFootball to give you some power numbers on Eddie but not all high school teams publish those numbers. A lot of prospects don’t really think about self-publishing that information on either their Hudl or MaxPrep pages either. Sometimes the failure to publish the information is borne from them not thinking it an aspect about them which necessarily is their best foot forward. In Eddie‘s case, it appears the failure to have those numbers readily accessible is more a naiveté about the overall process and not an attempt to hide this information. We believe Eddie Patrick to be a solid FBS/FCS, Division 1, football prospect who is certainly worth a look-see.