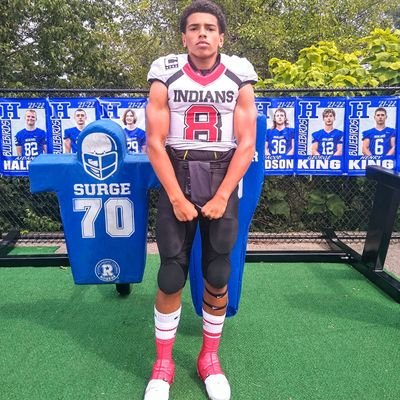 We have before written about this prospect. As a ’26 prospect, that should say plenty.

We haven’t written about a ton of ’26 prospects. The reader is free (and should) draw an inference concerning how very talented this particular player really is to even be featured by this particular publication.

Take a look at this prospect’s featured photograph attached to this article. That should give the reader another definitive idea how far from normal this 8th-grader really is as a football prospect and an athlete.

Of course, if the physique doesn’t cue one in; there are lots of other indicators.

Everyone is quick to bring up Austin Alexander when discussing top-flight Northern Kentucky, 8th-grade football talent. Alexander is really something. He is not alone.

Cam Thomas, a 6-0, 180-pound grown-man appearing 8th-grader who is a regular member of his school’s honor roll, is Alexander-esk if the reader doesn’t mind our inventing a term. Thomas, who played for the Northern Kentucky Bengals (like Alexander), attended Turkey Foot Middle School. His having attended Turkey Foot give us an idea where he may compete in high school but certainly isn’t completely dispositive.

Most Turkey Footers, if you will, matriculate to either Dixie Heights or Simon-Kenton. Either program would be both thrilled and delighted to get him. There is no guarantee he ends up at either but he would certainly push for PT at either place.

Thomas is a guy who has played on both side of the football thus far in his tender football career. Most forecast him playing RB/LB/DE in high school. Should he attend either Dixie Heights or Simon-Kenton, he will (most likely) have to choose a side of the football on which he would like to focus.

Neither program makes it a habit to facilitate two-way play, though Michael Mayer’s “Iron Man” play at Covington Catholic a few years ago signify anything is possible. Mayer was a first-team All-State selection at both TE and LBer, and a Mr. Football winner, before moving along to Notre Dame where he is among college football’s finest TEs.

Can Cam Thomas follow Mayer’s lead? Well, anything is possible. He is certainly on the right track.